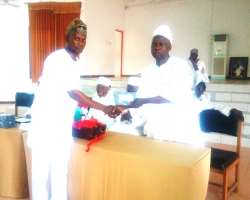 His name is Mr Opeyemi Jimoh, a holder of Bachelor's and Master’s degree in Mechanical Engineering from Ladoke Akintola University of Technology and the University of Ibadan. He is an unassuming egghead charged with the teaching of Mathematics at IMA International Model College, Abeokuta, Ogun State, Nigeria. Winner of several awards, Mr Jimoh fell deeply in love with teaching of Mathematics and Further Mathematics which many students dread like plaque owing to their abstract and “problematic” nature. The Proprietor, His Excellency Judge Bola Ajibola, described the feat in the following words “What I saw and heard on Thursday 26th of July 2018 among our outgoing Students at IMA International Model College not only amazed me but gave me the impression that these students must be the best among the best students all over Nigeria if not in Africa. They performed wonders in their dedication and diligence to fruitful and profitable performance in many ways.

“Before the day in question, they had performed wonders in their examination. And even before the examination they all unanimously took a decision to fast for seven days which they completed with prayers.

“God Almighty answered their prayers because all the 35 Students passed their WAEC Examinations. Besides, none of these students failed in Mathematics. In fact they all got A1.” The Vice Chancellor,Crescent University, Abeokuta, Professor Ibraheem Gbajabiamila during his remarks at the Award and Prize-giving, said the graduates of IMA International Model College, Abeokuta were some of the lucky ones to have had access to quality education provided by the management of the school.

Gbajabiamila charged the graduates and the current students of the college to crown their excellence by joining the Crescent University. Ameera-general,Islamic Mission for Africa, Alhaja Amatullah O. Ajibola presenting a prize to one of the students

The college school had recorded 100% success twice in the SSCE in the past. However, the uniqueness of this year’s result is the near impossible feat of A1 parallel recorded by products of the school in Mathematics in 2018.

According to Mr Jimoh in an interview, Mathematics is not a difficult subject; it is the methodology of many teachers and delivery that pose problems. He emphasized that the fear appeal by many Mathematics teachers make students dread the subject which cause the victims to later in their lives have career switch from Mathematics related subjects. A Mathematics teacher, in his estimation, should cultivate his or her students to be their friends.

He added that he would always ensure that “certain topics like Statistics, Trigonometry, Quadratic graphs, Trigonometric graphs, Longitude and Latitude which come out every year in WAEC were always treated in details.”

“These topics need to be dealt with more seriously than the others” he revealed. Mr Jimoh believed that since Mathematics topics are usually linked, previous knowledge of students in previous topics and previous year should be assessed by the teacher in charge who must go “extra, extra mile” to tutor the students.

He also identified that “the teacher must also be very patient in handling the subject” while an effective teacher should go as far as explaining Mathematics in indigenous language because according to him “the subject is abstract”.

On his advice to Mathematics teachers generally, he noted that “they should be lenient with their students while taking the subjects…some teachers make the subject hard or harder than its seems”.

“Mathematics deals with steps and that is what WAEC marks. You may even get the final answer wrong and still get like 9/10 in a particular question. So it has to go with steps. I have been involved in WAEC Coordination. I know the rules and this has helped”. Mr Jimoh also identified giving a lot of assignments and entertaining a lot of questions from students even beyond the regular periods of the subject. This according to him is because one or two periods of regular class are not enough to groom students to the desired standard.

He also agreed to a large extent that most failure in the subject is attributed to psychological reason regarding teacher-student relationship “so that the flow of the knowledge will be okay.”

There is no doubting the fact that Mr Opeyemi Jimoh is an exemplary model of how an ideal Mathematics teacher should be—proactive, patient, painstaking, friendly and methodical. The world needs more of this genius to develop the fledging minds.