N108bn EFCC Case May Be The Reason
By The Nigerian Voice 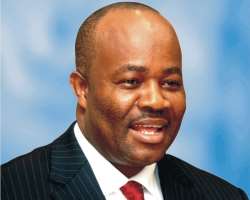 Facing fresh probe from the Economic and Financial Crimes Commission, EFCC, former governor of Akwa Ibom State, Mr. Godswill Akpabio, is set to dump his PDP party for the APC to get some form of soft landing, according to reports Friday.

Vice President Yemi Osinbajo on Thursday, met with the Senate Minority Leader, Senator Godswill Akpabio, reportedly to perfect the lawmaker’s defection to the All Progressives Congress (APC) from the Peoples Democratic Party (PDP).

The former governor in recent times doesn’t have much of a working relationship with his predecessor Udom Emmanuel, with close associates confirming the feud between the duo is increasing by the day.

The EFCC is investigating allegations that the former governor embezzled N108bn during his tenure between 2007 and 2015.

Akpabio has also been accused of a gift of N1.4bn to a bank for unknown reasons by the EFCC.