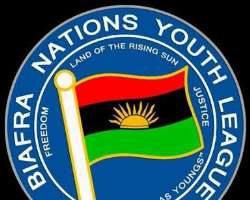 Biafra Nations Youth League, BNYL have linked the recent Police harassment against the Senate President and Deputy Senate President of Nigeria and other Senators on their failure. National Leader of BNYL, Princewill Chimezie Richard hinted that among the failure of the Senators is their inability to amend the constitution to be in line with the provision of International Laws recognizing the rights of indigenous people to seced. Richard said the actions by the Police was a clear indication that Nigeria is ruled by dictatorship. "Separation of power, checks and balances have failed totally in all organs of the Government including the judiciary being the last hope of the common man are under the armpits of the President".

Meanwhile, BNYL have reinstated commitment towards realization of a sovereign state of Biafra.

The group said it would pursue it's nine points agenda towards actualizing the Biafran State, BNYL Leader in a statement to newsmen said "out of the nine point agenda that we have, we have successfully carried out three in some areas, while some places we have not yet kicked off.

Among the three stages we have embarked on is taking Biafra to the grassroots, which are grassroots mobilization and sensitization, community engagements / participation and getting the various groups and tribes to initiate a Memorandum".

He said some agitators in Akwa Ibom State have presented a proposal on the structure of the new Biafra to the Igbos and other tribes.

BNYL said that the Organization is working hard to build a formidable leadership and acceptable structure of the Biafra Government to the people of former Eastern region.

"in areas like Ikom, Esit Eket, Bakassi and and Obudu, we have embarked on our stage four which is Political consciousness, once we are done, the road will be smooth for our independence from Nigeria ".