Don't crucify anyone leaving one party to another: Prof Wole Soyinka 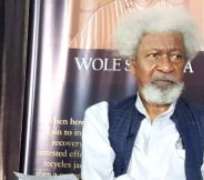 Nobel Laureate, Professor Wole Soyinka, says he does not believe anyone who decides to leave a party should be crucified for making such decision.

He said this on Thursday in Lagos at the presentation of his new book 'Who Is Watching The Watchmen?'.

Professor Soyinka, however, criticised the ill intentions of some politicians as their reasons for dumping one political party for another.

He faulted some of the events that played out in Benue State recently, especially the reactions that trailed the defection of Governor Samuel Ortom.

Similarly, the Nobel Laureate engaged in an interactive session on the subjects raised in the book.

One of the issues he spoke about was what he referred to as 'the mal-administration' in one of the previous governments.

Soyinka noted that the administration was a part of the sabotage which led to the failure of electricity in Nigeria at that time.

The interactive session also had in attendance human rights lawyer and Senior Advocate of Nigeria (SAN), Mr Femi Falana, as well as a renowned journalist, Mr Kunle Ajibade, among others.

Although there has been a lingering political crisis in Benue, the situation got worsened after members of the State House of Assembly replaced Mr Terkimbi Ikyange with Mr Titus Uba as their Speaker.

Ikyange, a member of the All Progressives Congress (APC), was impeached on Tuesday last week after Richard Ujege (Konshisha State Constituency) moved a motion of no confidence against him.

The crisis took another dimension the following day when Governor Ortom defected from the APC to the Peoples Democratic Party (PDP).

While the governor has since decried the manner of running the affairs of the ruling party in the state, he said he took the decision to leave the party after consulting with the people.

On Monday, the impeached Speaker and seven other APC members of the Assembly served an impeachment notice on the governor, a move which the National Assembly described as unconstitutional.

Senate President Bukola Saraki, as well as the governors of Kwara and Sokoto states, Abdulfatah Ahmed and Aminu Tambuwal, had consequently joined Ortom in the PDP.

Earlier, the ruling party lost dozens of lawmakers in the National Assembly to the opposition party, but the APC has continued to nurture hopes of victory in the forthcoming general elections.