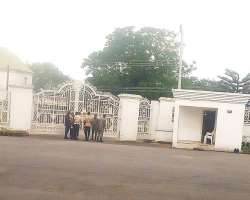 We wish to draw the attention of the general public and the Inspector-General of Police of the continuation of utter disregard for Rule of Law by the Commissioner of Police, Dasuki Galandanchi, who has thrown caution to the wind by withdrawing the security apparatchik of the Deputy Governor of Imo State, Prince Eze Madumere, thereby making him susceptible to attacks.

The Office of the Deputy Governor condemns the action of the Commissioner of Police for yielding to being an instrument of oppression in the hand of the Governor and ready to do his bidding, too.

The Imo State Commissioner of Police, in the wake of the failed swearing-in of the Governor Okorocha’s new Deputy Governor designate due the refusal of the Chief Judge and other qualified Judicial Officers in obedience to court order, had withdrawn all police officers attached to the Deputy Governor.

We view such action as not only deliberate but playing-out a script of his sponsor not only harming the Deputy Governor but to also take his life.

In the same spirit of impunity and recklessness, strange looking police men without any recourse to the restraining order of court, at about 10 am on Tuesday, August 1, 2018, sealed-off the entrance gate to the office of the Deputy Governor with chain and padlock without any reason advanced for their action. When asked, they claimed they were sent from Governor's office. All the staff of the Deputy Governor were not only humiliated but chased out of the Office.

This act of impunity has, in no little measure, affected the business of the Office of the Deputy Governor as Imolites who visited the office for genuine reason were humiliated and embarrassingly turned back.

This act of illegality is not only limited to the Office of the Deputy Governor, Prince Madumere, his official residence located in the Commissioners’ quarters along Concorde Boulevard was also sealed-off. His Excellency, the Deputy Governor, relations and staff have not been allowed access to the facility and to their personal belongings.

Our concern is not unconnected with the court order, which restrained all parties involved in the impeachment saga to stay action until the determination of the matter before the court. And by this decision of the Court, Prince Eze Madumere incontrovertibly remains the Deputy Governor of the State.

We are also surprised at the twist of event even after Governor Rochas Okorocha had directed that court order must be obeyed to the latter as relayed by the Attorney-General of Imo State, Hon. Militus Nlemadim.

We hereby appeal to the Inspector General of Police to call the Imo State Commissioner of Police to order and direct him to restore Prince Madumere’s security details without further delay.

While we hail Governor Okorocha for his directive that court orders must be obeyed to the letter with respect to the present legal issue, we urge him to also direct for the unsealing of Deputy Governor’s office. This is to avoid denying Imolites their right of requesting services due them, especially such that boarder of the constitutional function of the Deputy Governor.

We wish to remind those involved in this act of lawlessness that High Court 8 Imo State High Court, Owerri, presided over by Hon. Justice Benjamin Iheka, had granted a restraining order to all those concerned in the impeachment proceedings against the Deputy Governor on Monday, July 30, 2018. Despite the Court Order, we regret the recklessness of Imo State House of Assembly who purportedly embarked on kangaroo arrangement in defiance.

His Excellency, Prince Eze Madumere is a law abiding Public Officer who has at all times conducted himself in a manner worthy of a leader.