Fire Out Break At EcoBank Head office in Victoria Island 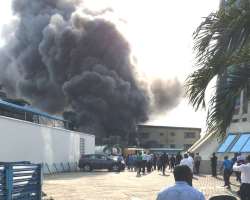 Eco Bank Head Office located in Victoria Island area of Lagos is reportedly on fire. It is reported that the fire may have been caused by aparent discharge of diseal into the generating set while the engine was running.

The fire spread into the office building in what spectators described as serious raging fire. As at the time of filling this report, the Lagos State Fire service is being expected at the scene