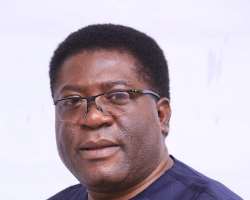 Determined to keep his job, the Deputy Governor of Imo State, Prince Eze Madumere has filed two fresh suits against the Chief Judge of the State, Justice Pascal and nine others to halt further actions of every impeachment move against him.

He is seeking court orders stopping further actions against his purported investigation bordering on gross misconduct amongst others.

The Deputy Governor is seeking a declaration that the constitution of a seven-man panel to investigate the allegations of gross misconduct levelled by the Speaker and the Imo State House of Assembly, against him is invalid, unconstitutional, null and void.

The Deputy Governor prayed the Court to determine whether the Chief Judge can constitute a panel of seven persons to investigate the allegations levelled against him “after the expiry of seven days, from the date of the passing of the State House of Assembly’s purported motion and the Speaker’s request to the Chief Judge, having regard to the provisions of Section 188(5) of the Constitution of the Federal Republic of Nigeria, 1999, (as amended).”

Further, Madumere is seeking a declaration by the court setting aside the appointment of the seven man investigative panel by the Chief Judge.

The Deputy Governor also sought to know if the Imo State Chief Judge can constitute a panel to investigate him while a legal suit with number HOW/531/2018 on the validity of the panel subsists.

He also wants the Court to determine whether the Chief Judge can legally constitute a panel of seven persons of unquestionable integrity, to investigate the allegations of gross misconduct made against the plaintiff by the Speaker and the State House of Assembly, during the pendency of suit number HOW/531/2018, instituted by the plaintiff against the Chief Judge, the Speaker and Imo State House of Assembly, in respect of the invalidity of the Assembly’s motion and the Speaker’s request to the Chief Judge to constitute the said panel.

According to the number two man in his 12-paragraph affidavit, he has put the respondents on notice about the originating summons of an earlier suit over any action relating to his job as the Deputy Governor.

Further, the Deputy Governor sought an injunction restraining the Speaker and the Imo State House of Assembly, from in whatsoever manner, receiving or accepting or acting on any report presented by the second to the eight defendants, pending the determination of this suit”