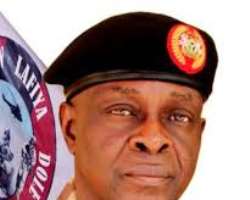 Speaking during the service, General Nicholas expressed appreciation to the congregation for their prayers and support, which he said, has translated to the peaceful atmosphere currently experienced in the North East.

He urged them to sustain their prayers and good neighborliness in order to enhance peaceful coexistence among people of all faiths in North Eastern Nigeria.

In his sermon, the Vicar of Saint Bartholomew Church and Deputy Director 7 Division Chaplaincy (Protestant) , Major( Reverend) Audu Usman described General Nicholas as a God fearing Commander who puts the welfare of his troops and subordinates first, as a matter of priority.

He urged the congregation to emulate the godly virtues exhibited by the outgoing Commander and prayed for his success in his new assignment.

Highlight of the service was the presentation of souvenir to the outgoing commander by the church and a special song rendition by officers of the British Liaison and Support Team led by Lt Col Alex Micheal, alongside choristers of Saint Bartholomew Church.

It will be recalled that General Nicholas assumed command as Theatre Commander Operation Lafiya Dole on 11 December, 2017 and had since carried out several fierce onslaughts on the Boko Haram insurgents in the Sambisa forest and the Lake Chad Islands, resulting in the rescue of over 800, 000 civilians and the surrender of many repentant Boko Haram Terrorists, as well as recovery of several arms and ammunition from the insurgents.

The valedictory service was attended by principal staff officers from Headquarters, Theatre Command and 7 Division ,Nigerian Army as well as officers from the British Liaison and Support Team.