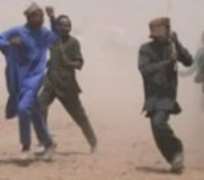 There are strong indications that ex-governors in the opposition party in Nigeria, the Peoples Democratic Party (PDP), may be involved in the herdsmen-farmers' conflict in some parts of Nigeria.

This was contained in a report recently released by a United Kingdom-based group, The Bridge Centre.

According to a part of the report, there are possibilities that chieftains of the PDP are supporting killers in their desperation to get at the government of the All Progressives Congress (APC) at the centre.

The report claimed that this may be the reason why many of the killings occur in communities that did not vote for PDP in the 2015 general elections.

The report cited the case of one “Gana” of Benue State, who was reportedly linked to an ex-PDP governor who ruled between 2007 and 2015.

In Benue, the report alleged Gabriel Suswam's successor, Samuel Ortom, of indecisiveness in the case of Gana.

“Gana has been identified to be allegedly responsible for scores of deaths, including many that were initially attributed to herdsmen. Ortom is now formally back in the PDP,” the report asserted.

Elizabeth Robertson, Head of Research and Documentation of the organisation, in the report, called on the United Nations Security Council to urgently intervene before the world starts dealing with the problem of a lost generation in Nigeria.

The report read part: “The world has on several occasions been appalled by the wanton killings in Nigeria from incidents attributed to clashes between herdsmen and farmers. Attacks upon attacks in affected communities have been blamed on “killer” herdsmen, who in such instances prove elusive as not much would be heard about the daring killer squads that carry out such crimes against humanity.

“The situation has triggered a cycle of blame game within Nigeria, with the consequence that the persons behind these killings, at least responsible in part, are successfully evading justice.

“Findings show that there is a need to investigate some of these persons who may have links with the PDP.

“Transhumance is a phenomenon that is not peculiar to Nigeria. It has been worsened by climate change, urban sprawl, changing cultures and economic pressure.”

The centre noted that investigation into the killing, murder, robbery cases of in Plateau, Taraba, Kogi and Kwara States must ve thorough by quizzing all PDP ex-governors and lawmakers including those who currently defected from the ruling party.

“Some political leaders of the PDP have in the period since the party was voted out of the Federal Government engaged in the formation of militias, which they armed with weapons prohibited under several international protocols.

“These weapons have been deployed in commission crimes against humanity as they resulted in mass killings.

“Taking cognisance of the continued desecration of the sanctity of human life, the United Nations Security Council is invited to order a full investigation into the role that politicians, especially the PDP, are playing in the killings attributed to farmers/herders' crisis.

“Arising from the findings of the full investigation, it should take the steps necessary to deter the kind of disregard for human lives as it is presently the trend.

“Time is of essence for whatever intervention the Council has to make since it is important that Nigerians are reassured ahead of the general elections.”