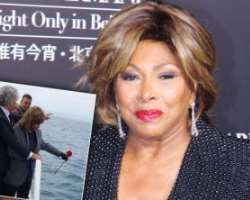 A few weeks after Tina Turner’s 59-year-old son, Craig Turner, took his own life, the famous rock-and-soul singer has shared a tribute to him on her Twitter feed.

Turner posted a photo of herself with husband Erwin Bach taking part in a memorial for her son on the deck of a boat as she prepares to drop a rose into the sea.

The pic is accompanied by a message from the 78-year-old Rock & Roll Hall of Famer that reads, “My saddest moment as a mother. On Thursday, July 19 2018, I said my final goodbye to my son, Craig Raymond Turner, when I gathered with family and friends to scatter his ashes off the coast of California.”

She added, “He was fifty-nine when he died so tragically, but he will always be my baby.”

Craig Turner’s biological father was Raymond Hill, a saxophone player who played in Ike Turner’s band The Kings of Rhythm. Craig was adopted by Ike, Tina’s first husband and longtime musical partner, after Ike and Tina were married. The couple divorced in 1978 and Ike died in 2007 at age 76.

Craig Turner was a realtor in the Los Angeles area.

According to the L.A. County coroner, he was found dead of a self-inflicted gunshot wound on July 3 at his home in Studio City, California.