20 killed in mosque attack in Zamfara 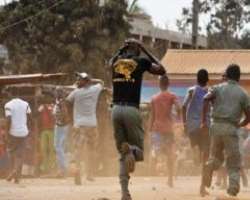 The incident, Daily Trust gathered, happened at a mosque during Asr prayer.

Last week, at least 30 people were killed in similar deadly assaults on five villages in Gidan Goga district of Maradun Local Government Area of the state.

Situated in a thick forest and surrounded by rocks, Kwaddi village is sharing boundary with Niger Republic as residents do cross the border to the neighbouring country for commerce and other activities.

Residents told Daily Trust that the gunmen had earlier invaded the village and killed at least eight people for failing to oblige to a N1 million ransom demanded from the whole community.

“They gave another deadline for the ransom and then left. Most of the residents are peasant farmers and none of them can boast of even N50,000. They came back and struck when people were observing Asr prayer.

“It was raining then, they left the mosque and started a house to house attack killing people in their own houses including those who had escaped the mosque attack,” a resident who craved for anonymity said.

The spokesman of the state police command, Muhammad Shehu, confirmed the incident, but said he could not give further details.