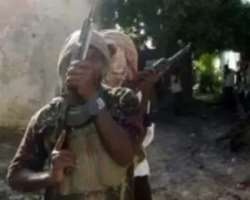 The bandits, allegedly ambushed a police vehicle on a routine patrol, along Birnin-Gwari Kaduna expressway, and killed three personnel, while also burning down their vehicle.

According to an eyewitness, the incident occurred near Labi village territory under Birnin-Gwari local government area of Kaduna State.

“We equally like to commend all security agencies for the difficult task of uprooting acts of terrorism, armed banditry and Kidnappings along Birnin-Gwari-Kaduna highways as well as Birnin-Gwari-Funtua road and indeed the Kamuku Forest.

“We are calling on all peace-loving people of Birnin-Gwari to volunteer in assisting security agencies to unmask all evil elements across our territory and also give accurate information on all hideouts of these criminals.”

Both the Commissioner of Police and Police Public Relations Officer (PPRO), Kaduna State command did not pick their calls when contacted yesterday and neither replied text messages sent to their phones.