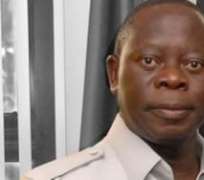 Comrade Adams Oshiomhole, National Chairman of the ruling All Progressives Congress (APC), is said to have masterminded the siege to the homes of Bukola Saraki, Senate President and Ike Ekweremadu, Deputy Senate President on Tuesday.

A key member of the Reformed APC (R-APC), who spoke with our correspondent on Wednesday, said Oshiomhole in his bid to facilitate the impeachment of Saraki and Ekweremadu and prevent a possible defection of lawmakers from the APC used his influence as the national chairman of the party to order the police to barricade Saraki and Ekweremadu's homes in order to prevent them from getting to the National Assembly.

He, however, said Saraki who has some informants in the police got wind of the plot a day before (Monday) and he, alongside some key PDP leaders, which include a prominent governor from the South-South perfected plans for him not to sleep in his Lake Chad junction, Maitama residence and also assisted him in gaining entrance to the National Assembly on Tuesday, thus thwarting the impeachment plot.

“I am a key member of R-APC and I know what is going on. Oshiomhole, the disputed national chairman of APC masterminded the plot. I am very sure President Buhari is not even aware of the development.

“Having failed in his bid to persuade the warring senators to sheathe their sword, Oshiomhole, in his characteristic combative manner as a former labour leader used his influence to get the security agents to mastermind the siege to the homes of Saraki and Ekweremadu. I wonder why the police are denying that no siege ever took place even when it is recorded and shown live on national television.

“But for some key informants who revealed the plot to Saraki, he would have been impeached by now”, he said.

Already, the Nigeria Police Force has denied sending a detachment of its men to the residence of Bukola Saraki, the Senate President.