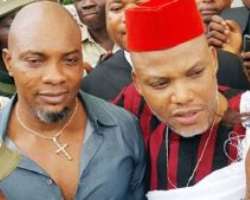 A District of Columbia (DC) Court in the United States (U.S.), has dismissed the suit filed by the Indigenous People of Biafra (IPOB) against the Federal Government and 15 others seeking millions of dollars compensation.

The group, through its plaintiff, Godson M. Nnaka and his lawyers, is also seeking payment of 40 per cent of the $550 million Abacha loot.

Others are governors of Abia and Anambra states, Okezie Ikpeazu and Willie Obiano.

IPOB had filed the case against the defendants in the U.S. court, alleging rights violation, torture and killing of its members, who were on peaceful protest at different times and locations between 2016 and 2017.

The case was filed by counsel to IPOB, DC Attorneys, Fein & DelValle PLLC, while the Attorney General of the Federation (AGF), Abubakar Malami, retained the services of Anthony O. Egbase of (AOE) Law and Associates to represent Nigeria.

IPOB had alleged that the respondents conspired and agreed to kill Biafran civilians in order to crush Biafra and terrorise them.

According to them, government officials engaged in extrajudicial killings of Biafrans, tortured and killed peaceful protesters during the Biafran Patriots Day parade on May 30, 2017.

Meanwhile, a U.S. District Court also dismissed another case against Nigeria, which sought to dissuade the U.S. from returning $550m Abacha loot to the country.

Nnaka had sued the Federal Government and Malami in the case marked 1:16-cv-01400-JDB, but the court dismissed the case, paving way for eventual repatriation of the looted funds.