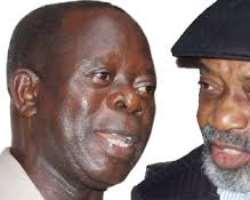 MINISTER of Labour and Employment, Senator Chris Ngige Tuesday said that those accusing him of not inaugurating the Board of the Nigeria Social Insurance Trust Fund, NSITF, because he was awarding contracts were ignorant of the Procurement Act, stating that neither himself as a minister nor the Board has the right to award contracts.

This is coming on the heels of the threat by the National Chairman of the All Progressives Congress, APC, Comrade Adams Oshiomhole who had on Monday threatened to expel Ngige or any other minister that failed to carry out his directive from the party.

The bone of contention between the two is the inauguration of Board of the Governing Council of the NSITF, where Oshiomhole had directed Ngige to inaugurate the board but the minister suspended the inauguration because of the ongoing probe of the Fund was under where about N62 billion was said to have not been accounted for by the past board A statement signed by the Director of Press, Ministry of Labour and Employment, Samuel Olowookere read, “The attention of the Hon. Minister of labour and Employment, Sen. Dr. Chris Ngige has been drawn to media reports that his office appropriated the powers of the Board of the Nigeria Social Insurance Trust Fund( NSITF) in the award of contracts, hence the delay in inaugurating the board of the agency. “Such a blatant falsehood is either on account of fertile ignorance or outright mischief or both by the originator as well as the peddlers. It is therefore imperative that the provisions of the Procurement Act 2010 which is clear and unambiguous on the process for the award of contracts be re-emphasized.

“For clarity purpose, the Ministerial Tenders Board (MTB) for the award of contracts in any Ministry is made up of the Permanent Secretary as chairman and his Directors, while in the parastatals, the Parastatals Tenders Board consists of the Chief Executive Officer (Director General or Managing Director) and his Directors . “The Minister is not a member and therefore does not award contracts. Similarly, members of Board of Directors being non-members of the Tenders Board of the parastatals do not also award contracts.

It is therefore a stunningly crass ignorance for anyone to claim that part of the reasons for the delay in the inauguration of the board of the NSITF or any parastatal was to enable the Minister usurp the role of the board as regards the award of contracts. “When the threshold of the award is above a parastatal, such contracts are referred to the MTB for final approval. Such also is the case with the Ministerial Tenders Board threshold which is referred to the Bureau for Public Procurement and from there, to the Council of Ministers called the Federal Executive Council for treatment and ratification. So in effect, the Federal Executive Council is not a contract awarding body and hence Ministers do not award contracts stricto senso! “It is our humble view therefore that those in authority should be versed in little basic issues that guide public governance so as to be properly guided in their utterances to avoid unnecessary character assassination and unfortunate misinformation of the general public.

Reason for delayed inauguration “Once more, the Honourable minister wishes to state that the reason for the delayed inauguration of the Board of the NSITF was to enable the Administrative Panel of Inquiry set up to probe a frightening degree of corruption amounting to over 48 billion Naira out of which N5billion disappeared in a day without vouchers, complete its assignment. “The panel has submitted its report while the committee implementing same report is already empaneled. It will finish its work very soon to pave the way for the inauguration of the Board of Directors.”