APC Crisis: Oshiomhole is becoming a problem, not the solution 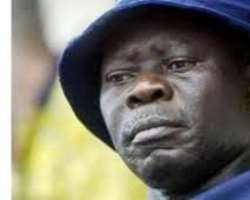 The most compelling attribute of Adams Aliyu Oshiomhole, the new chairman of our great party, the All Progressive Congress (APC), remains the doggedness he organized protests during the democratic regime of then president, Olusegun Obasanjo. But events thus far are revealing the hard truth: trade union activism is far from party leadership. This point is that, Oshiomhole, who was brought in to stave off crisis and lead the party to victory in 2019, is already becoming a problem, not the solution.

Recall that the first turmoil that greeted Oshiomhole’s chairmanship was the splinter group, the Reformed APC (R-APC), Instead of exploring meaningful avenues for peace at the time, the new party chairman heightened the crisis by attacking the group’s credibility. To Oshiomhole, the R-APC was inconsequential, boasting that the party would win in 2019 regardless. He went further to dismiss the group merely as a “counter force” against “President Muhammadu Buhari’s resolve to fight corruption”

Oshiomhole’s next major display was at Owerri where he went to fan Governor Rochas Okorocha’s campaign of infamy. Instead of remaining an unbiased umpire, the new national chairman was seen in open daylight drumming support for the twin unpopular candidates of the party in Muhammadu Buhari (for president) and the son-in-law of Okorocha (for governor of Imo State). This show of shame simply angered the masses in the Eastern Region, where Buhari is still viewed with utter disdain. It might have also undermined any chances of regaining support for the party in Imo State, where the image of Okorocha only pales in comparison to that of a Satan.

The most troubling yet is Oshiomhole’s ongoing war against other APC presidential aspirants who have expressed interest to challenge Buhari in the party’s primary. The comrade has probably forgotten that Nigeria is no longer in a military regime where any dissent translates to a coup d’état. This dictatorial attitude is least expected in a progressive party that claims fidelity to rule of law and internal party democracy.

As if these moves lack in folly, Oshiomhole engaged in witless squabble with the Minister of Labour, Chris Ngige, over the latter’s performance in office. The encounter is ignoble and any further detail exhumes mess. Yet, the whole drama appeared like a sudden change of government with Adam Oshiomhole now in charge. The notion behind such scathing overreach, regardless of the intention, only goes to cast President Buhari as an incompetent and clueless leader.

The objective fact is that the actions of Adams Aliyu Oshiomhole since assuming office have been an embarrassing failure. Though he has been hustling lately, showing some desire for peace, the damage is already done. But there is hope, if only Oshiomhole can listen. Someone has to whisper to the comrade that he was elected chairman for all, not APC chairman for Muhammadu Buhari and his self-serving minions. Further, he has to be able to differentiate between the responsibilities of a president and that of the chairman of the party. More relatively, the former union leader needs to understand that party leadership thrives with dialogue, not temperamental protests.

Any meaningful dialogue within the APC begins with the truth. The truth is that Buhari’s 2nd term ambition is the central problem. Therefore, as odd and impossible as it may seem, any real solution requires Oshiomhole’s team to craft ways to ease out Muhammadu Buhari from the presidential race. The president no longer has what it takes for the 21stcentury Nigeria and the voters are keenly aware. Therefore, the APC leadership must consider nation before selfish interests. The worst thing that can happen to Nigeria is any loophole that can allow the Peoples’ Democratic Party (PDP) to creep back to power. And Buhari’s candidacy is that loophole.

Of course, the big wigs in APC are also aware of the problem of Buhari. Even some of the principal leaders in APC, including those now grandstanding as PMB 2019 promoters, particularly the likes of Nasir El-Rufai, Rochas Okorocha, and Bola Tinubu, truly wish Buhari could step aside so they can take a shot at the presidency. Their body language alone during the time the president was hospitalized in London better tells the story. Understandably, they have become craven.

Enter the R-APC people. Its arrow heads, particularly Bukola Saraki, Rabiu Kwankwaso, and Aminu Tambuwal have never hidden their desire to be president in 2019. Like former Vice President Atiku Abubarkar, the R-APC group only wants to leave the party because they cannot imagine fair play in the APC primary with President Buhari in the race. Needless to mention that an emerging caucus, the Patriotic APC (P-APC), where this writer belongs, already features challengers to Buhari within the party without minding whose ox is gored.

This seemingly mass uprising within the ruling party against its sitting president is a recipe for a woeful future. But that is where party leadership matters most. It calls for Oshiomhole to organize the leaders of the different factions and confront Muhammadu Buhari with the truth. There is a good chance the president will yield. After all, the retired army general may be analog in style, quite alright, but he is no man’s fool. Buhari knows that the center can no longer hold. The mere fact that his presidency is now at the teetering mercy of a legislature, controlled by his own party, is a dizzying testimony.

There is no better unifying factor in APC than a 2019 presidential race without Muhammadu Buhari. A competitive presidential primary within the party featuring competent candidates will energize members towards victory in 2019. This medicine is definitely very bitter.

SKC Ogbonnia, an APC Presidential Aspirant, can be reached via: [email protected]