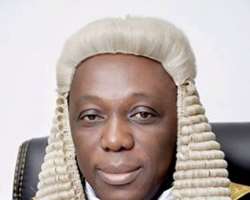 The recent constitutional amendment that granted full financial autonomy to the Judicial and Legislative arms of government has been applauded by the Delta State Attorney-General and Commissioner for Justice, Mr. Peter Mrakpor, saying that it is a constitutional development that would further enhance the principles of separation of powers and deepen democratic practice in the Country.

Mr. Mrakpor who drummed up the position of the Delta State Governor, Senator Dr. Ifeanyi Okowa, while receiving the new elected Chairman of the Asaba branch of the Nigerian Bar Association, Mr. Freddie Eruli-Ede and his executive members in the Attorney-General’s Chambers, said financial autonomy to the other two arms of government was a welcome development and heavy burden off the shoulders of the executive.

The Delta AG advised the two arms of government to put necessary bureaucratic measures in place for the prudent management of its allocations in line with the fiscal accountability and transparent policy of government.

The Justice Commissioner, while congratulating the emergence of Mr. Freddie Eruli-Ede as Chairman of the NBA, Asaba branch in a keenly contested election, expressed joy that the Asaba Bar has assumed a cosmopolitan status which now gives everyone a sense of belonging without social or ethnic affiliations.

He appealed to the Freddie Eruli-Ede executive to build bridges of harmony and mend fences to have a strong, united and vibrant Bar.

While assuring the Asaba Bar of his commitments to the completion of their Bar Centre, the Justice Commissioner enjoined the various chapters of the NBA to raise the quality of practice and advocated for a synergy with private property developers or Mortgage banks for the development of Lawyers village within the state capital.

Earlier, the Chairman of the NBA, Asaba Branch, Mr. Freddie Eruli-Ede had told the AG that as the official leader of the Bar in the State, the visit was to formerly introduce members of his exco to him and solicited his guidance and support even as he tabled some of their pressing needs before the Justice Commissioner which included the completion of their BAR centre, state of some courts in the state, official vehicles for judicial officers amongst others.

Eruli-Ede also commended the AG for contributing to the growth and development of the NBA in the state and for hosting meetings of the branch.