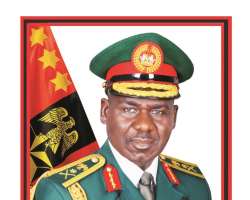 The Chief of Army Staff (COAS) Lieutenant General Tukur Yusufu Buratai and his team have been in the Theatre in last 48 hours to access the Operational development in the North East, particularly Northern Borno and have just concluded strategies to improve on the State of Security of the general area.

Brigadier General Texas Chukwu , the Director Army Public Relations in a statement on Tuesday said that Jilli is a border town between Borno and Yobe states with close access to Niger Republic.

According to him, the attack in Jilli was very unfortunate but has been brought under control as our troops have since reoccupied the location and are exploiting ahead. In most asymmetric operations incessant attacks of this nature are not uncommon.

The wounded soldiers are presently receiving treatment in the Military Hospital. Military operations are normally of strategic national security value and the media need to be very cautious when reporting some of these development that has national security implications.

The North East of Nigeria remains very safe and the general public are advised to remain law abiding and go about their businesses.