Ritual Killings: The story of woman who was rejected by ritualists, and gory tale of how she watched slaughtered 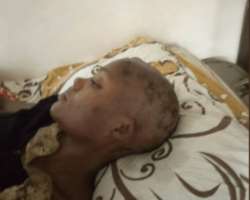 According to Osagie James-Idemudia, a woman was lucky to escape alive from a ritualist den after the chief priest rejected her, and she has narrated how she watched others get killed after they all boarded a bus together only to find themselves in a forest later.

The woman boarded the bus last Friday in Benin , Edo state, with other passengers , but they were taken to a forest at upper Ekhehuan for ritual purposes.

She told of how she watched them slaughter the only other female passenger who boarded the bus with them. Next, they slaughtered two male passengers. When it got to her turn, the chief priest rejected her and she was thrown out of the forest naked.

She was eventually rescued by passers-by.
Read the story below as presented by Osagie James-Idemudia.