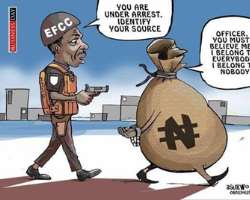 I don’t know whether Charley-Boy still runs that his TV programme, where he usually assured viewers that everything is possible. Drawing inspirationfrom that, I have had cause to describe Nigeria as a Charley-boy republic because it is a country where EVERYTHING was and is possible: the bizarre, the unbelievable, the inexplicable and even the foolish (see the four-part in serial in BusinessDay, December 2011). It is only in Nigeria that this herdsmen menace can happen and where the government openly defend and make excuses for such a murderous gang. And the excuses are laughable. It is either that they are foreigners, or that they were trained by Gadhafi; or that the carnage is caused by legitimately passed anti-open grazing law or that Fulani cows have been rustled. But other strange things are happening beyond the audacious herdsmen, their sponsors and their defenders in high places. It is only in Nigeria that almost every parliamentarian is suffering from acute integrity-deficit and yet, they are making laws for us; that cases instituted while I was in primary school are still undergoing judicial rigmarole of come-today-come-tomorrow; where a governor who cannot pay his workers salaries has the temerity to officially celebrate a multimillion Naira mansion, where animals are so powerful that a snake could swallow millions of Naira and rats could chase the most powerful president in the world out of his office, where a 75+ year old man( official age, that is) is seeking reelection while his employees are retired at the age of 65 and where an anti-corruption president openly deifies his hero who has been confirmed as one of the greatest champions of kleptocracy in recent times. It is only in Nigeria that a president signs a budget which he publicly admits is mutilated, queries the authority of NASS to tamper with the budget and yet fails to seek judicial interpretation; and where fuel subsidy has been abolished and yet there is a daily shortfall of N2,4bn between landing cost and pump-price of the product. But I digress.

In 2017 Nigeria faced an unusual challenge: humongous amounts of money in local and foreign currencies were freely walking about the streets in broad daylight without any owners and without the usual police escorts. The monies were indeed, orphans! It all started in march 2017 when N49m was discovered at Kaduna airport. In April 2017, an assortment of foreign and local currencies ($43,449,947, £27,800 and N23, 218,000) valued at about N15bn was discovered in Flat 7B, Osborne Towers Ikoyi Lagos, which we later learnt, was bought for $1.6m Cash by Mrs Folashade Oke, wife of sacked NIA boss. In the same April, large sums, stuffed inside bags were discovered inside three vehicles(a Mercedes Benz S350, KTG 01 AA, a Lexus SUV Jeep ABC 77 AKK and an unmarked BMW 640i series) at Shendam Close, in Area 11 of Abuja. That was when I knew that in addition to raiding homes, offices and farms, the EFCC also has the power to raid unmanned cars, with or without court orders!. In the same April, N18m, $19,000 (N5.8 million) and 4,000 Saudi riyals (N326,000) were found in the Abuja residence of Danjuma Goje, while another N449, 000, 860 was recovered from an abandoned Bureau De Change office in Lagos and on 11/4/17, N4bn was recovered from a Deputy Governorship candidate in Niger state( Just imagine how much would be arrested from the governorship or presidential candidates in rich states like Lagos, Kano and Bayelsa). Later on 10/11/17, the sum of N250m (€547,730, £21,090 and N5,648,500)was discovered at the Balogun Market in Lagos( later claimed by a tomato-seller).Before it became a commonplace, the first discovery were the sums of $9,772,800 and £74,000 from a Kaduna house of, Andrew Yakubu, the former NNPC boss. In another twist of the wandering billions, the London police stormed the house of a Nigerian student debtor and discovered $8.5m in his apartment!

One “comforting’ thing about this strange disease is that it was not made in Nigeria or restricted to Nigeria, as the German customs service discovered $1.3m cash inside a luggage at Dusseldorf Airport in April 2017. The only differences were that the action contravened specific laws ( transporting more than E10000 out of Germany without declaration) , the way the matter was handled (suspects were questioned and released) and how the money was treated( it was confiscated). There were no first and second investigation panels and no assurances by the police that it would leave no stone unturned to get to the roots of the matter( I thought by now, they would have overturned all the stones!)

In 1994, my 4 year old daughter, escorted my wife to Diamond Bank in Kano and was so amazed at the bundles and bundles of money all over the place that she shouted: Mummy see money; see money; and they say there is no money! That was my first reaction to these orphaned and wandering billions, especially at a time everything was in abeyance due to recession, which as Lai told us, was caused by PDP and Jonathan. Furthermore, I was alarmed at the extent to which greed would push sons of men. If somebody spent N1m daily, it will take about 3 years to exhaust N1bn. At 100,000 daily, it will take almost 30 years! You can then imagine how long it would take to deal with N15bn! When we were growing up, that kind of money was defined in Igbo language as agukata agba awaa: a number you count until your jay breaks. And yet people are playing Ping-Pong with billions and even trillions; amounts that are equivalent to the budgets of some neighbouring countries. I am sure that Guinness Book of Records would have taken note of these wandering and orphaned billions

As a concerned citizen and a stakeholder in the Nigerian project( even though some stakeholders hold no stakes), I have be wondering over this mater privately in the past one year but now, I want to wonder aloud. Why did all these discoveries take place only in April 2017? Why did the discoveries suddenly stop? How did EFCC achieve all these sudden recoveries and why has it not been making further recoveries? What were the sources of these monies in a country under the throes of recession? And most important: Where are all the monies, including the ones with concrete identifiable sources?

In the academia, we are told not just to highlight problems but also to include policy recommendations for the betterment of the society. I hereby recommend that the Government opens an Orphanage Account at the CBN to warehouse all the orphaned monies, to be managed by a commission on orphaned monies, headed by a concerned orphan for the sustenance of orphans. Furthermore, as an orphan and a patriotic Nigerian, I humbly offer myself to perform the thankless task of midwifing and nurturing the proposed commission. I promise on my honour, not to perform a Maina-magic with the funds