Defilement of A Minor: Carpenter to serve 50 years in Kirikiri for defiling JSS1 student 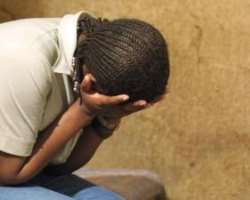 Sunday Salami, a 31-year-old furniture maker will spend the next half a century languishing in Kirikiri Prisons, Lagos, for defiling a 14-year-old Junior Secondary School 1 student.

Justice Sybil Nwaka of an Ikeja Domestic Violence and Sexual Offences Court sentenced Salami after convicting him of defilement contrary to Section 137 of the Criminal Law of Lagos State 2011.

Sentencing Salami, the judge pointed out the gravity of the offence of defilement and that the Lagos State Government was using all its resources to fight the menace.

“This is an offence in which the accused person has been accordingly convicted and carries with it a sentence of life imprisonment without an option of fine.

“Learned counsel asked the court to temper justice with mercy; my hands are tied.

“The case of the defendant is a very serious offence that should not be treated with kids gloves and a defendant who is convicted should be put away as our minors especially our young girls are at risk.

“The Lagos State Government is not relenting in fighting this menace and we should all join the government in the fight.

“I hereby sentence the defendant to 50 years in prison,” Justice Nwaka said.

According to Mr Babajide Boye, the Chief State Counsel, Salami committed the offence on May 9, 2017 at Ibrahimo Street, Bariga, Lagos.

“The complainant is also a hairdressing apprentice, and at 2.00 p.m. after the close of work, she was on her way home when the defendant accosted her, dragged her to an empty shop and forcefully had sexual intercourse with her.

“She informed her mother of the defilement and the incident was reported at the Bariga Police Station,” he said.

NAN reports that during the trial, three witnesses: a medical doctor, the Investigating Police Officer (IPO) and the complainant, testified for the prosecution, while Salami testified in his defence.

Salami while testifying denied knowing the complainant as well as defiling her.

The court held that the findings of a medical report presented by the prosecution were consistent with the complainant's accounts of vaginal penetration.

“He is a first-time offender, a furniture maker by profession and he is sorry for what he did especially as he has spent two years in incarceration.

“We urge the court to give him a second chance, he is still in the prime of his youth at 31 years and we are pleading with the court not to impose the maximum sentence.

“He can still be useful to the society and he has become a born again Christian, he fasts daily and that is why he is very lean,” Obuagbaka said.