2019: We Need a Man of Honour, Character, Integrity to Rule Nigeria... Abba Jato 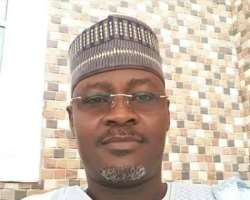 EXCERPTS:
The Nigerian Voice: As the 2019 general elections, especially, the presidential election is at the corner, What is your view on the political situation in Nigeria?

Alhaji Mohammed Abba Jato: The 2019 Presidential election is fast approaching, and the enemies of this nation are uniting. They are planning to come back to power and hold this country into ransom once again.

Even the media are also angry with the situation. The reason: There is no more free money from the government for the looters to continue to loot and spend anyhow again.

TSA has taken over the situation and permanently addressed that problem of financial misappropriation by public office holders and even the civil servants that loot public funds.

The Ex generals are murmuring because there is no sign any where that President Buhari will renew their oil blocks contracts any more.

Similarly, the ex governors and legislators are being arrested, dragged to court by EFCC and ICPC, sentenced to jail by courts or/and made to cough out public funds that were in their custody or that they misappropriated.

The Social cultural groups are also grumbling, because no more Ghana must go bags of money to support Buhari campaigns as in the past when public funds were misused and now being investigated by the EFCC.

The issue of government sponsoring executives into offices has been blacklisted and condemned by President Buhari unlike in the past during former President Jonathan Good luck as those who benefitted are now returning the campaign money distributed to them or going to jail as EFCC investigates and makes arrest.

That is also the reason why the Royal Fathers are also shouting and complaining because President Buhari does not pay homage to the kings and chiefs with cars and cash gifts as was the case in the past instead of welfare to the people or citizenry. The Nigerian Voice: What about other institutions both social, financial, commercial and political sectors of the country?

Alhaji Mohammed Abba Jato: The Legislators are not cooperating with the executive because there is no more budget padding and bribes before passing of the budgets as it used to be in the past during former Presidents Obasanjo, YarAdua and Jonathan.

No more Ghana must go bags circulation and packaging within the upper and lower chambers of the national assembly as well as the state houses of assembly but dedication to duty to serve the nation and due process or entitlements contrary to the past legislative procedures and leadership.

There is absolutely a change, a new order for that matter which impressively, majority of Nigerians especially, the poor masses of this country are grateful to God Almighty for giving Nigerians an honest, patriotic and committed leader in the person of President Buhari, acclaimed by the world at large as a patriotic and transparent leader who has good intention for the country and mean well for Nigerians.

Fighting corruption alone with only minimal support because the corrupt have severally attempted to destroy him but God being on his side, saved him to continue to work for this country and we are hundred per cent solidly behind him to continue the good work he has started.

The Nigerian Voice: Do you think that going by the level of corruption in the country, President Buhari's Anti graft crusade will be successful during his tenure?

Alhaji Mohammed Abba Jato: Can't you see all over that both public and private sectors have changed their system of operations and financial dealings.

Even within our religious institutions, the Corrupt Religious leaders are lamenting. There are no more shaddy arms contracts for those involved in government contracts.

With Treasury Single Account TSA system introduced by Preident Buhari, there are no more corrupt practices and shaddy deals as it used to be within the civil service.

Where several or numerous bank accounts was operated by a single organization or ministry or parastatal or agency or commission in the name of contract awards or payments and welfare packages with different names and signatories.

Similarly, the introduction of the Bank Verification Number ( BVN) within the bankung industry have exposed their sharp practices and brought to an end the shaddy deals and other illegal and corrupt transactions.

The Nigerian Voice: But some Nigerians are of the opinion that this has affected the socio economic status or position of the country, I mean national economy and development in Nigeria?

Alhaji Mohammed Abba Jato: Not at all. It has rather affected the spoilt kids who are bitter and angry about it because President Muhammadu Buhari has made people to understand that their parents are not that rich but are rather public funds looters and corrupt.

This has made the kids or children to start instigating innocent and poor other children to believe that President Buhari is bad and his government has brought hardships and sufferings to the people of Nigeria which is not true.

The truth of the matter is that Nigeria has never had a good leader and transparent government like that of President Buhari who came to power to cleanse the system of governances and leadership of the country and not to enrich himself as past leaders did.

The Nigerian Voice: What about the oil sector of the country that has been generating lot of controversies?

Alhaji Mohammed Abba Jato: The oil bunkerers have been complaining, the oil marketers also are not left behind and the avengers are further compounding the problems grounding and destroying oil pipelines and wasting our potential crude oil because President Muhammadu Buhari removed oil subsidy with good intention and in the national interest of the country.

This is because the intention of the present administration is for the country not to experience any more fuel scarcity in any part of the country or long queues in fuel filling stations as obtained in the past.

But despite all these efforts and good intentions, President Buhari's plans are misconstrued by enemies of his government at many instances across the country with the reappearances of long queues at filling stations in the wake of fake fuel scarcity out of sabotage.

But their political antics and gimmicks were exposed and God willing, the situation was brought under control despite the fact that the President monitors and supervises the affairs of the Petroleum Ministry directly along with the Minister of Stae of Petroleum Resources.

The Nigerian Voice: What would you suggest for a way forward for the country?

Alhaji Mohammed Abba Jato: Having realized the set of people that want to set this country ablaze because of their controversial ways of believe and lifestyle, I pray that Almighty God should help President Muhammadu Buhari overcome all these obstacles and give him the wisdom, strength , ability, compassion and patience to take Nigeria to the promised land in his second tenure bid which we strongly support he should recontest to complete the good work he started in 2015.

Because Nigeria as a complex nation with large population and multi ethnic groups and religions background, deserve a man of honour, character, discipline and integrity to rule the country to take us to the promised land that our founding fathers saw, dreamt and fought for from the precolonial and colonial era to independence and post independence.