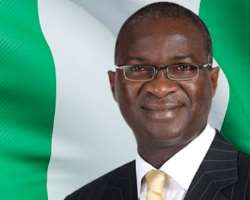 The Minister of Power, Works and Housing, Mr Babatunde Fashola SAN has commiserated with the government and people of Lagos State over the tragic tanker explosion which occurred on Thursday evening outward Lagos towards Ojodu Berger.

The fatal mishap which occurred when a tanker loaded with Premium Motor Spirit (petrol) lost control after descending the stretch of the bridge around the Otedola Estate led to the loss of nine lives and several vehicles.

In a statement signed by his Special Adviser on Communications, Mr Hakeem Bello, Fashola expressed sadness over the incident describing it as painful and most regrettable.

The Minister, who also condoled with families of victims of the accident , said it was a harrowing experience to learn that a family member who had gone to engage in productive activity would never return.

“ I wish to extend my sincere condolences to the Government, People of Lagos State and the families of victims who died or suffered burns in this most unwelcome development”, the Minister said.

While wishing survivors rapid recovery, Fashola commended the sense of duty of the emergency service providers who promptly responded to bring the resultant fire under control and managed the traffic.

The Minister said it was important for all stakeholders in the private and public sectors, especially owners and operators of articulated vehicles , to renew their commitment to best practices and road safety awareness in order to ensure the stoppage of unnecessary loss of life and property on the nation’s highways.

Fashola, while reiterating the resolve of the President Muhammadu Buhari- led administration to continue to work to improve motorability, journey time and achieve better travel experience on the nation’s roads, noted that available data indicate that excessive speeding was among the highest causes of accident hence the need for all road users to be conversant with traffic rules and regulations which promote safety on the nation’s highways.

The Minister prayed for peaceful repose for the souls of the departed victims of the accident.