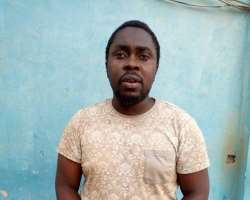 The mother of the little girl, Mrs Ayoola Tolulope of Olufemi Oshin Street, Alagbole Akute reported to police that Essien who owns a barbershop in the neighborhood abused her daughter sexually.

According to the woman, the teacher of her daughter told her that the girl confided in her that a man has been having sex with her.

The mother said that she interrogated her daughter and that the girl confirmed that Essien had sex with her three consecutive times.

Upon this report, the Divisional Police Officer of Ajuwon Police Division, Mr Afolabi Kazeem led detectives to the area and the suspect was arrested.

The Police Public Relations Officer (PPRO) for the Ogun State Police Command, Mr Abimbola Oyeyemi told The Nigerian Voice that during interrogation, the suspect confirmed that he had sex with the little girl three times.

The police spokesperson also added the girl was taken to hospital during investigation and that medical reports also confirmed the little girl had been defiled.

The Commissioner of of Police in Ogun State, CP Ahmed Iliyasu has transferred the case to Anti-Human trafficking and Child Labour Unit of the State criminal Investigation and Intelligence Department for further investigation and prosecution of the suspect.