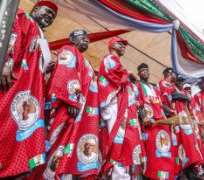 Fresh fight broke out early Sunday morning at the Delta state stand at the Eagle Square, venue of the All Progressives Congress (APC) National Convention.

The fighting occurred as voting and counting of votes were going on in different pavilions to elect new officers for the party's National Working Committee (NWC).

The tenure of the party's Chief John Odigie-Oyegun-led 21 member NWC ends on June 25.

It took the frantic efforts of security agents to bring the situation under control as chairs, tables and sticks were seen flying in different directions, as argument broke out at the stand.

A man who was seriously beaten and wounded being dragged out of the arena by security agents.

The reason for the pandemonium was not readily ascertained, but it was gathered that it may not be unconnected to the tightly contested seat of the party's National Organising Secretary.

While Gov. Rochas Okorocha of Imo was said to favour Mr Emma Ibediro for the position, South-East APC stakeholders wants its current occupant, Sen. Osita Izunaso and other national officers of the party from the zone to be re-elected.

President Muhammadu Buhari is expected to arrive the convention venue this morning before the announcement of winners.

Aspirants, delegates and party members have remained calm as they await the outcome of the Convention which had been conducted under tight security.NAN