Pastor, 2 others nabbed over ritual killing of 19-year-old girl 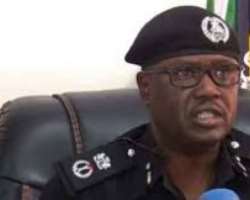 Police in Kogi State has arrested a cleric, Oluwasegun Aturu and two others over the suspected ritual killing of a 19-year-old commercial sex worker, Miss Mercy Moses.

The Police Public Relations Officer of the command, ASP William Aya confirmed the arrest of the suspects to newsmen in Lokoja on Friday.

He said that Aturu who claimed to be the shepherd in charge of Voice of Canaan Temple, Cherubim and Seraphim Aladura Church, Ozuri, in Adavi Local Government Area of the state was arrested on June 19.

He was arrested alongside Samuel Oluwasegun and Abdulmumini Yakubu, all of Ozuri area in the local government, he said.

According to the police, both Oluwasegun and Yakubu were said to have, at about 10 pm on June 11, gone to a popular brothel in the council area to pick the late girl to an unknown place.

They were said to have conveyed the deceased out of the brothel on a motorcycle after exchanging pleasantries with the manager of the brothel simply identified as Mohammed.

“The two men then approached one Mercy Moses, one of the commercial sex workers' residents in the brothel. After discussing with Mercy, she was seen being taken away by the men on a motorcycle.

“When after two days she did not return, the brothel manager, Mohammed reported at a nearby Police Station at Adavi from where the case was taken up by the State Criminal Investigation Department, Lokoja,” the statement said.

He said that police investigation later led to the arrest of Pastor Otaru, Oluwasegun and Yakubu but they all denied the knowledge of Mercy's whereabouts.

“However, following diligent interrogation by the Homicide Detectives of the State CID, both Oluwasegun and Yakubu opened up to the gory details of how they were hired by the pastor to bring a female for him.

“They confessed that Otaru hired them to bring a female for ritual purposes, promising them N700,000.

“The arrested suspects thereafter led the investigators to an area called Uhodo in Ogaminana area of Adavi where the torso of the remains of Mercy Moses was dug out from a shallow grave,” he said.

According to him, police was able to track and arrest Pastor Otaru who had since the arrest of his accomplices, fled the neighbourhood.

He said that the exhumed remains of the victim were deposited at Okene General Hospital mortuary for autopsy. (NAN)