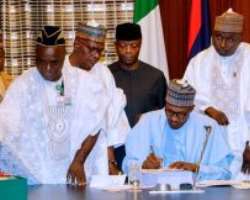 President Muhammadu Buhari, on Wednesday, signed the 9.12 trillion 2018 budget passed by the National Assembly, in May.

President Buhari presented N8.6 trillion budget to a joint session of the National Assembly, in November 2017 but the lawmaker upped the figure by N500 billion, which has been a soured point between the executive and legislature.

The President said he signed the budget in the interests of the nation.

The signing ceremony which was done in one of the presidential chambers, was witnessed by Vice President Yemi Osinbajo, ministers and top presidential aides.

Senate President Bukola Saraki, Speaker of the House of representatives Yakubu Dogara, other key principal officers of the National Assembly were absent at the signing ceremony.

He signed the budget in company with the Vice President, Professor Yemi Osinbajo, as well as the Secretary to the Government of the Federation, Mr Boss Mustapha, and the Chief of Staff to the President, Mr Abba Kyari.

Some of the ministers who witnessed the signing are Senator Udo Udoma (Budget and National Planning), Mr Lai Mohammed (Information and Culture), and Mrs Kemi Adeosun (Finance).

Twitter Ads info and privacy
President Buhari had submitted a budget proposal of N8.612 trillion to the National Assembly on November 7, 2017.

The lawmakers, however, increased the proposal by N508 billion to N9.12 trillion, when they passed the Appropriation Bill on May 16, 2018 – six months after it was presented.