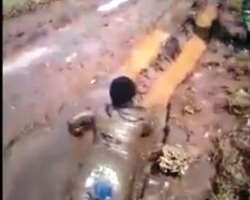 New video purports to show gendarmes of Cameroon's brutal and despotic ruler, Paul Biya, forcing women to crawl through mud in an ongoing reign of terror on the English-speaking citizens of South Cameroon.

A similar display of barbarism was witnessed in Nigeria in September of 2017 on Aba-Umuahia expressway, when Nigerian troops terrorized pro-Biafra Igbos, drowning them in mud with a least one death recorded. It appears Paul Biya is cloning Buhari and army chief Buratai's inhumane, deadly response to protests which were permitted by the global community.

The horrific videos out of Cameroon can be viewed:

Earlier images have captured all forms of torture by the Cameroonian soldiers, seen beating unarmed youth and mothers and even jumping on their heads. Many images also show dead bodies strewn on the streets and dumped in pits.

The level of the genocide in South Cameroon cannot be properly documented as Biya has enforced a total media blackout and social media , internet and phone block across the English-speaking independence seeking south.

At least 97 villages are said to have been burned by the Cameroonian army as what has been called a genocide by the government is being perpetrated.

Dr. Brimah and others of Cabal Must Go movement Wednesday commenced protests at Cameroonian embassies, paralyzing the Lagos embassy "while sending a message to Paul Biya that his barbarism will no longer be tolerated." View video: https://www.youtube.com/watch?v=EPjpOCdj-W0

South Cameroonians have also accused the Buhari-led Nigerian government of working with Cameroon's Biya, complaining that their leaders who sought asylum with Buhari have since been no where to be found and have not been reached by family members and lawyers. It is not certain whether these leaders were killed by Nigerian authorities or by Cameroonian authorities or if they are alive who is holding them now.