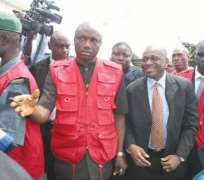 Justice Mohammed Idris of the Federal High Court sitting in Ikoyi, Lagos has adjourned to June 27, 2018 for further hearing in a N3.2bn fraud case involving a former governor of Abia State, Orji Uzor Kalu, and others.

Kalu is being prosecuted alongside his company, Slok Nigeria Limited and his former Commissioner for Finance, Jones James Udeogu, for money laundering to the tune of over N3.2bn.

At the last adjourned sitting, the Economic and Financial Crimes Commission, EFCC, through its counsel, Rotimi Oyedepo, SAN, had sought to further amend the charge against the defendants, after closing its case.

However, at the resumed hearing today, June 13, 2018, the prosecution counsel, Oyedepo, informed the court that he was served with copious applications dated June 6, 2018 and filed on June 7, 2018 by the defence counsel led by Kalu Awa, SAN, in opposition to his application to further amend the charge against their clients.

He further told the court that today’s proceedings was meant for the court to either hear his application to further amend the charge against the defendants or to hear the no-case submission that had previously been filed by the defense counsels on behalf of their clients.

In his response, the lead defence counsel, Awa, told the court that there was an extant application on behalf of his client, Kalu.

Also, Udeogu’s lawyer informed the court that he had filed an application dated June 8, 2018 in respect of the further amended charge being sought by the prosecution.

He further told the court that though he had received processes by lawyers to Kalu and the third defendant, Slok Nigeria Limited, the prosecution had not replied to any of them.

He, therefore, sought an adjournment to allow him respond accordingly to the series of applications filed by the defence team.

Justice Idris, after listening to the argument by both counsel, adjourned the matter to June 27, 2018 for hearing of applications filed by the defence team against the amended charge being sought by the prosecution.