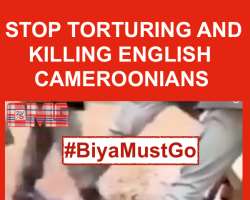 WednesdayJune 13th at noon, Dr Perry Brimah and members of the "Cabal Must Go" movement will begin protests at Cameroonian embassies in Lagos and around the world, to protest the unhinged deadly torture of Cameroonians and Nigerians in English-speaking Cameroon.

The brutal dictator Paul Biya-led Cameroonian administration has continued a free reign of barbaric torture of Anglophone Cameroon. This savage barbarity has no place in the modern world.

It is greatly disappointing to see a rather toothless African Union and a decisively absent United Nations, fail to act strongly and decisively to demand an end to the torture and murder of Black Africans in Cameroon as has been the case in Libya, Nigeria and other nations in recent times. This failure of global bodies to act fast to prevent and abate inhumane acts must come to an end.

It is also highly disappointing to note that the Buhari-led Nigerian government has invigorated the Cameroonian despot by recently deporting Anglophone asylum seekers. An act that was widely condemned by individuals and organisations including our ENDS.ng , SERAP and the UNHCR .

We invite Nigerians to demand the end of the brutal Cameroonian dictatorship of Paul Biya. We invite all to join us at the Cameroonian embassy in Lagos, address: 5 Elsie Femi Pearse St, Victoria Island, Lagos. And to call the embassy phone numbers to demand an end to the reign of brutality. Embassy contacts: Tel: (+234) 14 48 09 85 EMAIL: [email protected] . To also tweet with the related hashtags and copy international organisations and bodies to live up to the basic demands of humanity.

Every human has a right to protest and right to demand freedom. These are inalienable rights as enshrined by the United Nations and the African Charter on Human and Peoples’ Rights as reinforced in Resolution 281 of 2014 in protection of the rights and freedoms guaranteed in Articles 4, 5, 6, 7 and 9.

There are horrendous videos and images capturing the brutal torture and murder of our neighbors and brothers in humanity in Cameroon by Cameroonian troops, too sorrowful to bear. The right to life, liberty and security of person is a fundamental human right as enshrined in Article 3 of the Universal Declaration of Human Rights. [Torture video: https://twitter.com/verite_s_l_cam/status/1004216035401138176 ]

The Nigerian government is urged to for once, act responsibly and preemptively to prevent barbarism in fellow African countries. Our current attitude of ignoring and aiding the abuse of African lives must end.

Nigeria must severe relations with Cameroon and demand the resignation of Paul Biya.

To this urgency, I have suspended my presidential campaign to demand my brothers, sisters and mothers in Cameroon's right to life, free and safe from barbarity and I invite all other well meaning Nigerians to take time off to fight for the innocent victims of neighboring Cameroon!

If we do not stand for them, who will stand for us?

Dr. Perry Brimah; the @CabalMustGo movement can be contacted by phone or on WhatsApp +234-903-420-3031; or @EveryNigerian on twitter.or via Facebook.com/CabalMustGo