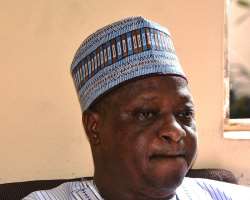 Senator Joshua Dariye, a former governor of Plateau State, who was being prosecuted by the EFCC for a N1.16bn fraud was on June 12, 2018 sentenced to 14 years in prison for criminal breach of trust and two years for misappropriation of public funds, to run concurrently.

Justice Adebukola Banjoko of the Federal Capital Territory High, before whom he was standing trial for a 23-count amended charge, found him guilty of 15 of the counts bordering on criminal breach of trust and misappropriation of public funds, but discharged him on eight.

After a judgment that lasted about eight hours, Justice Banjoko held that:

"I can't imagine such brazen act, is it the transfer of as much as about half a billion naira from the state's Ecological Fund into a personal venture account; there's a litany and trail of woe, which also affects the people of Jos - the beautiful Tin City, where everybody wanted to be, and to find out that its Ecological Fund was misappropriated is the shocking aspect.

"There's a deep sense of irresponsibility; the defendant was in fact richer than his state. This is a trauma of the trial; and there should be no compromise to corruption, by whatever shade or colour, or region, rich or poor; corruption will forever be corruption.

"Every case is different on its own, and I have no personal animosity, I'm just doing my job the way I know how to, and not only the Ecological Funds [were misappropriated], but funds from the Plateau State government."

Indeed, Dariye, who was first arraigned before the Judge on July 13, 2007, had his application to quash the charges dismissed. He proceeded to the Court of Appeal, but failed before proceeding to the Supreme Court, which on February 27, 2015 dismissed his application and reprimanded him, condemning his application as "a disservice to the criminal process" in Nigeria. The Apex Court also ordered "accelerated hearing" of the fraud case against him, thus necessitating the continuation of his trial on January 25, 2016 before Justice Banjoko.

Dariye was accused by the EFCC to have diverted about N1.16 billion Ecological Fund meant for the state, to his personal use, including transferring monies to Ebenezer Retnan Ventures (an unregistered company managed by him) and Pinnacle Communications Limited.

In proving its case against Dariye, the prosecution team led by Rotimi Jacobs, SAN, called 10 witnesses, including Musa Sunday, the EFCC investigating officer, and Peter Clark, a detective constable with the UK Metropolitan Police in London, who investigated Dariye in the UK for money laundering offence.

Presenting several documents in court, including bank documents, the prosecution established that Ebenezer Retnan Ventures was not a registered company, and that its account opening process with then All States Trust Bank, was riddled with irregularity indicating "dishonest intent" for opening the account.

The defence team, which was initially led by G.S. Pwul, SAN, before Kanu Agabi, SAN, later stepped in at the tail end of the trial, presented 16 witnesses in its defence.

In the allocution of the defence, which was made by Paul Erokoro, SAN who stood in for Agabi, he urged the court to temper justice with mercy, arguing that the Bank in question "misled the governor" into engaging in such practice of "private banking".

"He is actually a victim; mistakes were made, but my lord should temper justice with mercy; the lawyer that represented him before did not do a particular good job; this man has suffered," he argued, further noting that "the prisons are congested and he is a serving Senator and he served his state".

In its counter-argument, Jacobs, called on the Court to consider the "aggravating factors" on the state, arguing that Dariye "exploited his position as a public servant and took government money and misappropriated it."

He said: "The era of go and sin no more can no longer be done in the new era of the Administration of Criminal justice Act. A lesson must be told. He is not my enemy, but people should bear the consequences of their acts. If you can't bear it, then don't do it."

In addition to the sentencing, Justice Banjoko also ordered that N80 million so far recovered by the EFCC be returned to the Plateau State's coffers.