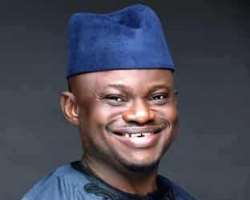 The gubernatorial candidate of the Social Democratic party in the forthcoming election in Ekiti, Akin Ayegbusi is set to flag off his political campaign on Thursday.

In a statement released by the office of his Campaign Organisation, the event which will take place at the Ekiti Pavilion on the NTA Road in Ado-Ekiti the state capital is expected to absorb hundreds of new members across the 16 Local Government Areas of the state who have made up their mind to join the party.

Similarly those who are decamping from other parties will also be admitted into the SDP which has now become the toast of Ekiti people as they consider the dynamism and vibrancy of the candidate of the SDP as a major tool to win an election.

The highpoint of the occasion will be the official presentation of the party’s flag to Akin Ayegbusi which will signal the flag off for the campaign of the SDP candidate for the July 14 election as he shall immediately begin the tour of the sixteen local government areas of the state.

According to the statement; “Ayegbusi is a young, vibrant and visionary individual who is set to take Ekiti out of the socio-economic doldrums it is currently experiencing. Through our agenda which include industrialisation of the state, creation of employment, women and youth empowerment, capacity building, food security through agriculture, adequate infrastructural development among others, we are prepared to rescue Ekiti from the hands of those who never meant well for the state.”

The flag-off event is also expected to have in attendance the national leadership of the party, state stakeholders and party faithful across the state which include the National Chairman of the party, Chief Olu Falae, the Deputy National Chairman, Dr. Ahmed Abdul, National Vice Chairman, South West, Chief Supo Shonibare, the State Chairman, Mr. Dele Ekunola, and other national leaders like former Nigerian ministers, Professors Jerry Gana, Tunde Adeniran, among others.