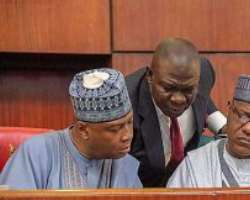 The National Assembly on Tuesday took a far-reaching decisions on some current issues in the country, which was headlined with a pass of no confidence on the Inspector General of Police.

The lawmakers reaffirmed their vote of no confidence on the Inspector-General of Police (IGP), Ibrahim Idris, and warned the President over the “systematic harassment and humiliation by the Executive of perceived political opponents”.

The lawmakers threatened to invoke its constitutional power of checking President Muhammadu Buhari if he fails to accede to their demands.

They urged the president to maintain a sense of equity in governance and in the fight against corruption.

The Chairman of the National Assembly, Bukola Saraki, read the resolutions of the lawmakers after a closed-door session which lasted about three hours on Tuesday.

The resolutions were on insecurity around the country, ongoing prosecution of lawmakers, disregard of National Assembly authority by the Inspector-General of Police, Ibrahim Idris, among others.

The lawmakers said they won't hesitate to invoke their constitutional right if Mr Buhari fails to act.

The Senate had earlier in May 2018 declared the IGP as an 'enemy of democracy' and unfit to hold a public office after the police boss refused to appear in person before the lawmakers.

Tuesday's emergency joint session comes amid renewed friction between the legislative and executive arms of government.

The friction had been ascerbated by the refusal of the dispute between the lawmakers and the police boss, the travails of Senator Dino Melaye with the police and the recent invitation of the Senate President over his alleged indictment by the Offa bank robbery suspects.

During the joint session, the lawmakers demanded an end to the persecution of perceived enemies and vowed to go tougher in checking the powers of the President.

“The systematic harassment and humiliation by the Executive of perceived political opponents, people with contrary opinions including Legislators and Judiciary by the police and other security agencies must stop,” one of the resolutions read.

They also resolved that President Muhammadu Buhari is accountable for the actions of his appointees.

“The President must be held accountable for the actions of his appointees and must be ready to sanction those that carry out any act which will ridicule or endanger our country and democracy,” read another the resolution.

The killings which have claimed the lives of hundreds of Nigerians in 2018 alone were also a source of concern for the lawmakers. And they believe that the security agencies must come up with an answer to them.

“The Security Agencies must be given marching orders to curtail the sustained killings of Nigerians across the country and protect life and properties of Nigerians as this is the primary duty of any responsible Government,” the lawmakers said.

Weeks after the lawmakers passed a vote of no confidence, separately, on the IGP and called for his removal, the IGP has remained in office.

With Tuesday's resolutions, they expect action to be taken. Should nothing be done, they vowed to take tough actions of their own.

“The National Assembly will not hesitate to evoke its Constitutional powers if nothing is done to address the above resolutions passed today,” they warned without giving futher details about the powers.