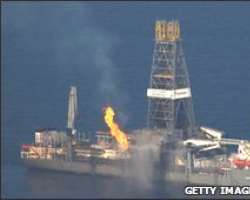 The prime minister has said he is “frustrated and concerned” about the environmental damage caused by the leaking well – owned by BP.

But Downing Street says the telephone conversation with the US president will be “statesmanlike and workmanlike”.

BBC business editor Robert Peston said BP was now likely to bow to US pressure and suspend dividends to shareholders.

The oil giant's directors will meet on Monday to discuss the possibility.

Our correspondent said: “It has taken a while for BP's board to reach the decision that if President Obama wants them to stop paying dividends, perhaps it would be sensible to do so.

'Resources to cope'
“It is looking more likely BP will cease paying the £1.8bn of dividends per quarter it's been delivering to shareholders – until, that is it, can quantify the final bill for the oil debacle and prove it can afford those enormous costs.”

He added: “Even if those costs exceed £20bn, as analysts expect, BP feels it has the resources to cope.”

Oil has been leaking into the Gulf since the Deepwater Horizon rig exploded on 20 April and sank off the coast of the US state of Louisiana, killing 11 workers.

A Downing Street spokesman said Mr Svanberg had told Mr Cameron that BP would “continue to do all that it can to stop the oil spill, clean up the damage and meet all legitimate claims for compensation”.

Mr Svanberg is due to visit the White House next week.

President Obama's criticisms of BP – and in particular its chief executive Tony Hayward – have been consistently blunt.

And some UK businessmen have accused the president's team of using “anti-British” language when discussing the spill.

But Liberal Democrat Energy Secretary Chris Huhne said he expected talks between the two men to be amicable and productive.

“It's in our joint interest to make sure that BP is able to go on functioning as an effective oil company, but first and foremost we have to deal with the environmental disaster,” he said.

The company's shares finished up 7.2% on the London Stock Exchange on Friday, recovering losses suffered on Thursday.

Its share price has almost halved since the oil spill began.