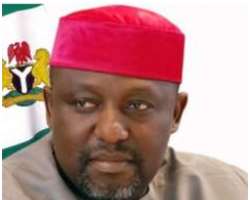 Since the beginning of his government in Imo State, Governor Rochas Okorocha has embarked on several elephant projects that have no economic impact in the State. These projects are characterized by haphazardness, touch and die style, China production model, and inconsistence or programme discontinuity, and rendering comatose several agencies and ministries in the State.

There are several government agencies, boards, parastatal organisations, etc, that were in existence and functional before his entrance to Douglas House, which are today dead and pulled to oblivion. Where is FSP, what is built at that place now- Why the demolition? Why demolish the old Ministry of Works, what goes on there now? Where is the Imo Water Board today? A new Girls College has taken the place of the mighty Imo Water Board, as the water networks and links in Owerri are now broken by his operators of urban renewal that take no cognisance of existing infrastructural networks and the Owerri Master plan, while destroying structures and societal chain-links of development.

There are many projects that prior to his entrance were booming and productive, harbouring employments for Imo citizens, but are today in comatose due to abandonment. The Prince and Princess Hotel projects are now abandoned issues. The running of Imo Concorde Hotel is today confusing, based on the lease of the hotel and who is in charge of it, despite the huge resources sunk in the hotel. ICAPS/Young Scientist School is now abandoned, and nobody talks about it again or dreams efficiently about its previous envisions for the development of the State.

The 44 City Gates, the first in the roll of Gov Okorocha’s projects are still uncompleted despite the huge resources the contractors vested in them and those spent by the Government. Gov Okorocha also embarked on flyovers construction in the State, which COREN certified as substandard and as such a future death-trap for Imolites and motorists, this certification meant nothing to him and he has abandoned the project like that. Imo road constructions are in China model of use and throw-away. Our roads are roofed than tarred, extant dangers thus lurk round the State.

In line with these abandoned projects; the Imo State owned football club is for the first time in 40 years relegated, yet Imo must be better in our time. The Standard Shoe Industry he made initial ‘garagara’ to invite Italian and other foreign investors to take over, is today moribund, just as the Avutu Poultry that received same flimsy interests is today in comatose. Imo Adalpalm, one of the biggest palm farms in South East and indeed in Nigeria, is today under lock and key. That was not enough for him, he plunged his administration into constructing an industrial park in Ohaji/Egbema, how far was it realised?

These apart, there is no gainsaying that Governor Rochas Okorocha has ruined administration in the State. Imo Local Government Administration is dead, it was suffocating previously during his first term in office, hoping for revival but finally met its waterloo in his second term. He stayed for 7 good years and run the Local Government from his wallet and could not conduct LGA elections to ensure true democracy to the grassroots, as the Nigerian Constitution had three levels of government. He instead imitated the defunct idea of Prof Chukwuma Soludo for Anambra State and run a 4th tier government with his CGC, and last year turned again to form SDC system of government, and in all, how far? He frustrated General Hospitals operation in the State and began new General Hospital projects after selling the previous ones. How functional are the hospitals today?

While ruining administration in the State, he sinned more against than sinning in the area of employment and alleviating the problem of unemployment in the State. He grossly mismanaged human resources and human capital development. Governor Okorocha maliciously sacked several Local Government workers across the State. In resuming function after being sworn in, he sacked the 10,000 job beneficiaries of the preceding administration. He later put his own youths and also sacked the greater part of his engineered Imo Youths Must Work, whom he saw and took as Youth Corps of the State. Imo workers and pensioners suffer most under him, with non-payment of pension arrears, gratuities, as well as deduction of workers’ salaries and stagnancy in civil service promotions.

Still ruining administration in the State, Governor Rochas Okorocha’s regime witnessed the worst loss of accreditations in vital departments and courses at Imo State University Owerri and Imo Polytechnics Umuagwo. Governance under him was reduced to mere familiocracy; his extended families, allies and cronies dominated his appointments in the State. Even his ex-appointees’ severance allowances were unpaid, despite several Court Orders compelling their payments.

In the same vein, victims of government encroachments and landed property acquisitions had their properties demolished without due compensations from the Government. The Governor turned into enemy of lands. As it stands today, there are no land-banks and open spaces in people’s houses and organisations living at the front lanes of major streets in Owerri Municipal City and little miles into the capital territory landscape. There are alleged forceful acquisition of private lands of Imolites, forceful evictions and demolitions of artisans’ shops and business areas in Orji mechanic village, and at present, all markets in Owerri municipal council are demolished, rendering many jobless, frustrated, hungry and ruined. Yet, he is on rescue mission.

The Imo education sector is in comatose. About 65% of Imo State government owned primary and secondary schools are understaffed. This fact is from investigations well conducted, and these happen despite having a Commissioner for Basic Education in the State, separate from the tertiary. He instinctively jumped into European University. Today, how far? The Eastern Palm University, which was built with State funds, who owns it now- The Imo State Government or an individual? What is its name now?

There are also innumerable other projects in the State that his administration began and left in comatose. Where is Imo Air? Where are the Turkey investors that Rochas boasted to have brought in the State? How far for the 15 Km roads awarded in each of the 27 Local Government Areas in the State? About 80% of the roads are uncompleted. There are several uncompleted projects, roads and other infrastructures round the State, which were started by Governor Okorocha’s administration.

In his regime, Imo traditional institutions were debased. Town unionism that has been an unsaid 4th tier of government in Igbo land was forced to suffocate, and traditional rulers in their exalted positions were abused in diverse ways through the Governor’s policies. In the past, Imo State and Owerri city are known for some traditional heritages. Today, Governor Okorocha has eroded all. Where is Eke Ukwu Owerri? Where is Ama JK? Where is Old Library? Where is Mbari effigy? What has come of ancient heritages at Douglas House? All previous art works at strategic road links in the State are now eroded. Assumpta roundabout that is the first port of call, coming into Imo from Rivers and Anambra State, is an eye saw. Perhaps the roundabout is a punishment for the administrators of the Cathedral.

Imo State that used to be the cleanest state in the country, is today known with heaps of wastes heaped virtually in every one-third kilometre. Outside the capital city, borrow pits are dung 10 metres to express roads by contractors doing Imo China roads for Governor Okorocha. There is poor environmental sanitation in the State capital, and even the entire drainage system has been bulldozed. Owerri municipal city has no drainage system.

As an oil producing State, Imo State enjoys 13% oil derivation funds from the Federation Account, these funds are allegedly misapplied, and the instability in the leaderships of NDDC, Ministry of Niger Delta Affairs and ISOPADEC are all figments of the Governor. ISOPADEC is today death.

What can Governor Okorocha rightly boast he has done in the State in his 7 years? Now he has less than a year to leave, is it when he will complete and put to right all these anomalies in his administration. No wonder he shops for his son-in-law to continue his good works. Perhaps he has in mind to use him complete the remaining projects still hanging in the State.