VIDEO : “We used to kill people in PDP” – Orji Kalu 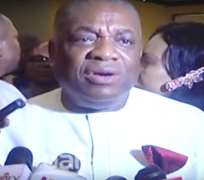 While addressing journalists in Abuja during the south-east zonal executive committee meeting of the All Progressives Congress (APC), a former governor of Abia State, Orji Kalu, alleged that the Peoples Democratic Party (PDP) killed people during its past congresses.

The former governor decamped from the PDP to the APC in 2016.

“In all democracy, there’s always a quarrel, and the quarrel will prevail, we will settle it amicable as a family,” he said in reaction to the divisive APC congresses recently held across the country.

“Everybody will come back to the party, and the party will have its honour, there’s no problem.

“In the PDP, we used to kill people when they are doing this thing (congress) which is not good.

“We are very happy the (APC) congresses came very well in south-east and went very well. We can only fight anybody in south-east who is not supporting our president.”