Nigeria is collapsing under your watch: - HURIWA to Buhari

*Condemns attack on catholic seminary in Taraba:
By HURIWA 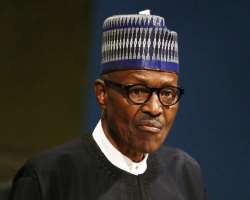 “The failure of President Muhammadu Buhari to immediately reorganize his failed and toxic internal security team made up totally of Hausa/Fulani Moslems who have failed to effectively check the unprecedented bloody attacks by armed Fulani herdsmen targeting farmers and Christians in the North, signposts the rapid collapse of Nigeria under the direct watch of President Muhammadu Buhari. This therefore calls for immediate soul searching on the part of President Muhammadu Buhari so he can salvage what is left of a rapidly collapsing Nigerian nation State. The nation is now more than ever so divided alongside Ethno-religious configurations even as it has become a stark reality that some persons are by the distorted and illegal discriminatory policies of government, made to perceive themselves as second class citizens who are not trustworthy enough in the opinion of President Muhammadu Buhari to hold such strategic ational security positions now exclusively and unconstitutional occupied by Nigerians of same religious and Ethnicity with President Muhammadu Buhari. We are simply deceiving ourselves by celebrating democracy day when Nigerians in their thousands have been gruesomely despatched to the great World beyond by armed Fulani herdsmen who are being protected by the powers that be currently in Nigeria”.

Making this observation is the foremost Non-governmental and Civil rights group – HUMAN RIGHTS WRITERS ASSOCIATION OF NIGERIA (HURIWA) which has also condemned the attack today at the minor catholic seminary in Jalingo, Taraba state leading to the fatal injury of several clergies and students.

HURIWA said the attack by armed Fulani herdsmen targeting the peaceful Catholic Church’s facilities and the shooting of the priests and students training for priesthood shows that the dimension of these attacks has switched from inter-ethnic terrorism to a full blown persecution and attacks of Christians of Northern origin. HURIWA wonders why the United Nations Security Council and the Authority of the Heads of States of the African Union are watching passively as a section of Nigerians seem to have been armed and motivated to slaughter other citizens which may snowball into a genocide of monumental scale soon.

The Rights group affirmed that the attack at the seminary in Taraba State coming barely two weeks after two catholic priests and 17 worshippers were killed by armed Fulani herdsmen in Benue state shows an escalation of the terror activities which should necessitate the immediate declaration of Miyetti Allah cattle owners association as a terrorist group.. HURIWA has asked the organised civil society community and the Faith based bodies to begin series of civil disobedience activities to compel an immediate change on the part of the Presidency to either stop the attacks, prosecute and sanction the mass murderers or resign within two weeks should these bandits and terrorists not stopped from carrying out the well coordinated Ethnic and Religious cleansing and genocides.

“For the avoidance of doubts, a clear nexus had since been established between the violent attackers and the leadership of the Miyetti Allah cattle owners Association in most parts of Nigeria. The case of Benue, Taraba, Plateau and Kaduna states is as clear as the sun light because the organized spate of attacks were unleashed as soon as this terror organization publicly threatened to frustrate the implementation of the anti-open grazing law in Benue State, or protested the theft of certain number of cows by the indigenous people who are mostly Christians and farmers".

"We have in the last three years asked the Muhammadu Buhari’s government to dismantle the nepotistic internal security team so as to compose a pan-Nigerian Internal Security team made up of officers from all parts of Nigeria and to declare Miyetti Allah Cattle Owners Association a terror organization, but President Buhari has refused. Now, most Southern Nigerians see the armed Fulani herdsmen as state sponsored terrorists”.

“We totally condemn the attack on the seminary in Taraba and most particularly, condemned the killing of over 30 people in a part of Zamfara state in North West of Nigeria. These attacks and killings show that Nigeria currently has no efficient leadership in the national security team and no amount of dollars granted these incompetent heads of security agencies can stop these attacks. We totally condemn the National Assembly for proposing to give more cash to the hierarchies of the security team who have in the lady three years failed to perform. No amount of cash can change a compromised and an incompetent officer to turn a new leaf. They must be dismissed and prosecuted for criminal negligence.”

“The only option open to President Buhari is to declare Miyetti Allah Cattle Owners Association as a terrorist group and to arrest, prosecute the leaders in the competent courts of law. The direct consequence of the continuous failure to act decisively, is that Nigeria will slide into total anarchy and chaos because Nigerians will not stand by and let armed Fulani slaughter all of them”.

HURIWA recalled that two Catholic priests were beaten, one shot in the leg when gunmen suspected to be Fulani herdsmen attacked a minor seminary in Jalingo, Taraba State capital.

HURIWA recalled that during the attack which was said to have taken place on Monday morning, some students were injured and many cars destroyed even as the persons injured were said to be receiving treatment at the Federal Medical Centre, it was not yet clear if people were killed.

HURIWA recalled that the Director of Caritas Nigeria, an agency of the Catholic Church, Rev. Fr. Evaristus Bassey, revealed this in a WhatsApp message to a correspondent of a national daily as follows:“Please Frs, pray for us. Our minor seminary in Jalingo has just been attacked by the Fulani, some students are injured, some cars destroyed, two priests beaten and one shot on the leg. They are currently receiving treatment at FMC.”

HURIWA said the group has already submitted a petition to the International Criminal court in The Hague Netherlands but expressed consternation that the global crimes forum seems to be too slow to bring perpetrators to justice just as it stated that it will send further evidence of crimes against humanity committed by armed Fulani herdsmen under the watch of President Muhammadu Buhari to the World's crime court today.