Imo Deputy Governor Dissociates Self From Reconciliation Move With The Governor

DESCRIBES IT AS FIGMENT OF IMAGINATION
By Kenneth Nwoke, The Nigerian Voice, Owerri 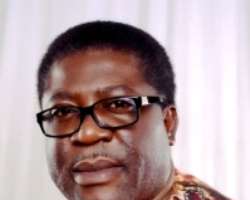 The Deputy Governor of Imo State, Prince Eze Madumere, has dissociated self from the rumoured reconciliation move between him and Governor Rochas Okorocha of Imo State, purported to have been made by Governor’s family members, describing this as a mere figment of imagination of the peddlers.

According to the release, Prince Madumere expressed astonishment over the rumour, saying he only got to know about this through barrage of calls and text messages by concerned Imo citizens. He however described such move as unnecessary and uncalled for, as he submitted that there is nothing on the table to call for such reconciliation.

He further explained that he had only disagreed with his boss and friend of many years, Governor Okorocha on principle, with the resolve to pursue his goal of impacting positively on the citizenry in concert with best leadership practices.

He therefore charged his numerous supporters and Imolites to discountenance such insinuations coming from rumour mills and kite fliers, pointing out that; “ This is a form of distraction, and I would not fall for such cheap blackmail;” the release re-assured.

Meanwhile, it will be recalled that penultimate week, while the Deputy Governor was away, the rumour mills had a field day, circulating such unimaginable story that there was strong move to reconcile Governor Okorocha and his Deputy, Prince Madumere.