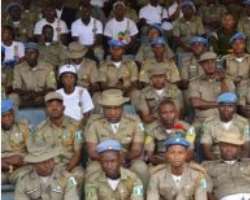 A Federal High Court in Abuja has given a lifeline to the Nigerian Peace Corps after it had a major set back on Thursday when the bill seeking to override presidential veto failed at the House of Representatives on Thursday.

According to the judgement of the court delivered Friday by Justice Ahmed Ramat Mohammed, in a fundamental human rights enforcement suit instituted against the Nigerian Security and Civil Defence Corps (NSCDC) in 2013 by the Incorporated Trustees of Peace Corps of Nigeria (PCN), the Corps is a “lawfully registered organisation that has the rights to carry out its programmes in the country within the ambit of the law.

The PCN had approached the court in 2013, when the NSCDC clampdown on its formation in the 36 states of the federation and the Federal Capital Territory, Abuja, arresting the FCT commandant and confiscating the uniforms and other items of the court.

Also joined in the suit were the Commandant-General of the NSCDC and one Aminu Abdullahi Kesoro.

The plaintiff had prayed the court to declare as illegal, unlawful and unconstitutional the interference of the civil defence with activities of Peace Corps officers and men posted to secondary schools and colleges who have partnership with the PCN.

Justice Mohammed in the judgment that lasted two hours condemned the action of the civil defence, describing it as “barbaric”, “uncivilized”, “unlawful” and “unconstitutional”, adding that the civil defence acted ultra vires.

The court, therefore, restrained the NSCDC from molesting, harassing, intimidating and threatening officers and men of the Peace Corps of Nigeria (PCN) in all the states of the Federation and the Federal Capital Territory.

The court also barred civil defence from interfering in the lawful activities of the Peace Corps in the 36 states of the federation and Abuja and as well stopping the NSCDC from attempting to seize uniforms of officers and men of the Peace Corps.

Justice Mohammed prohibited civil defence, its agents, privies under any guise from taking any action that will infringe on the fundamental rights of the officers and men of the Peace Corps in the country.

The Judge held that the clampdown constituted abuse of power and breach of the fundamental rights of the Peace Corps officers and men as enshrined under section 34 of the 1999 Constitution.

Justice Mohammed, who in the judgment frowned at the hostile attitude of the civil defence against the Peace Corps, also prohibited the NSCDC, its Commandant General, officers, their agents and privies from obstructing the Peace Corps officers and men lawfully posted to schools across the country for the purpose of providing security for the schools.

He, therefore, granted an order of perpetual injunction against the civil defence from threatening, harassing, molesting, intimidating and disrupting the activities of the Peace Corps officers and men in their lawful official duties.

Reacting to the judgment, the National Commandant of Peace Corps of Nigeria, Amb. (Dr.) Dickson Akoh, thanked the judiciary for ensuring that the rule of law prevailed in the dispute.

He said the NSCDC infringed on the fundamental rights of his men with unlawful clampdown on them and seizure of their uniforms in the Federal Capital Territory (FCT) in 2013 as well as dispatching the officers of the Corps who were posted to secondary schools for primary assignment.

“I thank the judiciary for standing tall in the face of intimidation; it is a thing of joy that the judiciary has remained resolute, focused and unshaken in the dispensation of justice. We hold judiciary in high esteem,” Akoh said.

Akoh who was not happy with refusal of police to vacate the corporate headquarters of his organisation in spite of several court orders remarked that the siege laid on the edifice in Abuja for over a year now is not only on Peace Corps alone but on the judiciary too.

He said “The rule of law as the bastion of democracy must not be ridiculed by anybody or organisation with impunity as doing so portends great danger for the nation.

“It is very unfortunate that some agencies of the government have reduced the judiciary to a council square.

“It is an affront on the judiciary and the rule of law for an agency of the government to choose which judgement to obey or not.”

Akoh urged the police to have a rethink on their disobedience to court orders, adding that the police leadership should learn to respect the law since police itself is a creation of law.

The House of Representatives had fallen short of its avowed determination to override President Muhammadu Buhari's veto of the Nigerian Peace Corps (Establishment Bill) 2017, as majority of the members overwhelmingly kicked against the move to bypass the president on the matter.

The legislation sponsored by Hon. Emmanuel Oker-jev (APC, Benue) was listed as a 'veto override' bill, expected to be passed for seconding reading.

Buhari had on February 27, 2018, withdrawn his assent to the bill, which had earlier been passed by the National Assembly, citing funding constraints and security as reasons for rejecting the bill.

Unconvinced by the reasons given by the president for the withdrawal of assent, the House of Representatives on March 14, indicated it had commenced the process of overriding the president on 10 bills, which were recently passed and transmitted for assent but were vetoed- including the Peace Corps bill.

But after an extensive debate on the subject matter, by members, some lawmakers, largely pro-Buhari, who didn't want the bill to see the daylight, as well as save the president from the seeming embarrassment that could result from the move, carried the day.