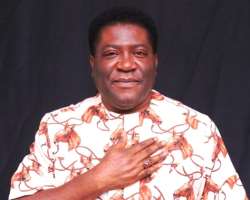 William Shakespeare, in one of his classics, Macbeth, x-rayed the viciousness, callousness and betraying traits of man as perfectly dramatized in the book to the appreciation of any man of experience. It is a story of how man, in his greed and thirst for power, can go to unimaginable length to assuage such thirst not minding what happens in the process, even if meant shedding innocent blood.

This was the case of Macbeth who the witches had foretold would be king and because he is ambitious, could not wait to see the prophecy come to pass. He resorted to self-help, which led him to the temptation of killing and later to his inglorious doom.

Shakespeare, in his vision, may have seen today’s betrayal of high magnitude in Imo State. He must have, during his apparition, seen a relationship of over two decades nursed with sweat, self-denial, patience, persecution, loss of self-esteem, loss of freedom and blood crashing for obvious reason of wickedness and paranoia of most tyrants.

Like the Shakespearean drama classic, Okorocha’s mastership in managing the betrayal of his supposed most trusted ally, Prince Eze Madumere has reached the needed climax. It also shows an enduring spirit and gift of concealing a man's disposition to evil.

Just like scene one of Macbeth opened with the message of the execution of Thane of Cowdor who betrayed his people in the battle field to King Duncan. The thriller continued with sustained suspense till the tragic end.

Yes, the two friends, were said to have met in the far away United States where Governor Okorocha, discovering great deposits every a man would insist on having in Madumere, beckoned on his new found friend to join him at home with a view to joining hands with him to contribute in the national development.

According to the story, the man Madumere, a very comfortable career person in the corporate America, in his love for the sweet coated tongue of Mr. Okorocha heeded the call but with a proviso that it would be a gradual process because of family and career with his business chains.

Prince Madumere as it were, Chief Okorocha’s testimony, was a reliable ally who was result oriented, dogged and ever ready to take his bullet. It is also on record Governor Okorocha started politics the same day with his Deputy who was there to ensure he never was shortchanged in the manipulative business side of politics.

In his usual flowery encomiums on his Deputy, associate and friend of over two decades; “In all my political life, there is one man who remained with me even in my worst moments. I contested and failed many times. The moment I fail, everybody will desert me. When I look to my right and to my left, the only person I would see is Madumere. And he will ask me, what next”.

Again, during the launching of a book written in honour of Prince Eze Madumere in October, 2016, while speaking about Madumere, Chief Okorocha said: “He has been with me for a long time. When I ran for presidency he was my P.A. and body guard. During Governorship, he was there as S.A. and later became Chief of Staff. I remember when I ran in the ANPP presidential primary against Buhari, he worked out with me when I discovered that the late Okadigbo went and changed the guidelines. Against Yar’adua, I came second, he was there. When I ran for Senate and Governorship he was there. You are what you are because you deserved to be, not because you were incarcerated. He never asks me to appoint somebody or ask for money.”

Today, like in Chinua Achebe’s things fall apart, the center can no longer hold. This may not be unconnected with man’s selfish desire to always be the issue; to the extent that commonwealth is mistaken for family patrimony where every business of the government revolves round the family.

In a similar character with the Old Major of George Orwell’s animal farm, on his ascendancy to the throne, he had sung songs of reformation and deliverance from the rudderless rulership of old politicians. Promising to retire them that there may be enough meat for the people; that the people may have their freedom and have in abundance; yes, it was speech of hope where agricultural revolution would return the usefulness of kobo since food would be in super abundance. He tagged the movement Rescue mission. He did not fail to admonish his best hands to eschew corruption and go hungry where necessary so as to stabilize the system for the people. This charge was so painful that the loyalists to the mission paid dearly as they lost their wives; some their other means of livelihood while some who agitated were sacked without severances as they were crudely confined to the scum of the earth.

For Madumere, it was reported that he did not only lose his wife occasioned by the innocent woman’s frustration over hubby’s dedication to the extent of ploughing all he had ever worked for the vision ahead, the vision of helping his boss and friend make real his vision for the people. Madumere as the Chief of Staff was made to work 12 hours of the day as morning while midnight was just the beginning of the main job. He thoroughly studied every file, co-opting anyone who could be of help to start – up the government. He sought the help of civil servants and even the retired were re-awakened to face challenges of office all in a bid to ensure the master succeeded. All missing links were re-linked with pieces of information sourced from various quarters, which was not limited to the ‘enemies’’ camp. Thanks to devout Madumere.

As soon as the job was done, the reality of Okorocha’s real self-showed forth. That ferocious instinct of Okorocha laced with super selfish desire and greed overtook the man we thought we knew. Yes, two private jets became a priority to the mission of making Imo better. Grabbing people’s land and building estates in nooks and crannies of the State became a focus; converting government owned property suddenly became attractive novel in the act of governance, traders who voted him in also became the problem of achieving the vision of Owerri Eldorado; he made them cry as they lose their means of livelihood to the grin of an emperor Governor.

Realizing that Madumere was averse to this new improved system of governance, he was quickly elevated to the office of the Deputy Governor to shield himself against the insecurity of being impeached and to remove him from the priority area and the new face of governance. Rather than get angry and frustrated, the young man created value for himself as he re-engineered the State’s bad record with international economic agencies. He toiled day and night, building solid teams to restore the battered image of the State. This effort was never a waste after all. NEWMAP, FADAMA, RAMP among others came calling.

On the contrary, his naïve son-in-law with no known good record became his closest ally if not a veritable accomplice who superintended the balkanization of Owerri ancestral lands preserved for their children in the State. He became so powerful that he became the Chairman to decide on what was to be done with over N26 billion bailout fund. Of course Nwosu, Governor’s son-in-law was not alone in this as leadership of the House of Assembly were corrupted with most of them more enmeshed in contracts and signing away people’s commonwealth on agreement of paltry sum.

Today, the table is turned around. The Chief traducer and oppressor of Imo people is in trouble. Those he boasted to have retired are close to retiring him. Those poor Imo people he displaced and impoverished seem to have found their voices back as they could now hand their survival on hope that sometime soon, their ultimate ruler would retire out of government with his boy and son-in-law out of power with the taking over of the All Progressives Congress structure at all levels.

Is this karma at work? Now that Okorocha is in trouble; that that the ghosts of his terrible past reappear, where does he run to even as he has exhausted his presidential contacts with no help in sight. Would he run to Imo people he has decimated or his kinsmen he sedated with contracts without pay? Would he seek the understanding of the Allied Forces – Sir Jude Ejiogu he disgraced out of office; Sen. Osita Izunaso he wanted to dethrone as the National Organising Secretary at all cost or Senator Benjamin Uwajumogu who was said to have suffered humiliation in the course of pursuing his election.

What of the man who packaged and organized a disorganized person like Okorocha, left his flourishing career and businesses, not knowing he was considered a slave before the emperor. From his confessions, Madumere spared nothing in service and in an effort to help Okorocha get to where he is. The question is, does he have the humility to go back to his erstwhile friend, associates and his deputy after all the enslavements? Madumere as Mr. Fix it in Okorocha’s political dynasty and to make matter worse, the rejected was his strategist and today in alliance with other Imo leaders all fighting to recover APC and the State from the clutches of enslavement… With his knowledge and mastership of Okorocha’s nuances, idiosyncrasies, his s.w.o.t analysis, Madumere remains Okorocha’s albatross.