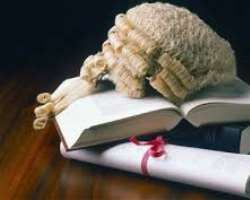 The case brought by the Inspector General of Police against the duo was called, but non of them was in court.

The Prosecutor, O/C Legal, Zone XI Police Headquarter, James Olajide Famuyini, ASP, told the court that he has duly informed the accused about the matter.

He said he has served them the charge sheet and even sent text message to them followed by phone call.

Famuyini however, prayed the court to issue bench warrant against the duo of the accused persons, for police to arrest them and bring them to court.

The presiding Judge, Justice M. A. Onyetenu issued bench warrant against the lawyer and his son and adjourned the case to June 14, 2018.