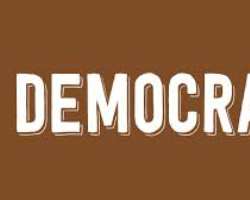 Democracy may not be the best form of government but its representative nature makes it a shade higher than monarchy, military dictatorship and one party system of government as exemplified by communist state. The eternal beauty of democracy is that periodically, the electorate, the owners of electoral sovereignty are given the power to use their voter cards to elect the president, governor and members of the legislative arm of government. That the elections are flawed is not the fault of democracy but those in charge of driving the system.

Recently, there was altercation between the Inspector General of Police and the senate as to the definitions of democracy and those who are the friends or enemies of democracy. This piece is not advocate of the IG or the senate as both are competent enough to speak for themselves. The only lesson from the face-off is the new phrase added to democratic lexicon. The senate described the refusal of the IG to appear before it to answer some security questions and the way and manner one of them was treated as an enemy of democracy. Since then, the brain of this writer has been tumbling the matter, over and over again and the result is this piece.

With due apology to the senate over the copyright ownership of `enemy of democracy`, I will rather add here that there are many enemies of democracy polluting the political scene of the nation and the most plausible reason millions of my compatriots are not harvesting the dividends of democracy. The recent conduct of party primaries of the two dominant parties was a harvest of enemies of democracy. Politicians who believe that politics is a do or die affair and the road to instant wealth are those behind the undemocratic nature of party primaries. Politicians who use money and thugs to manipulate the internal democracy of their parties are indeed the enemies of democracy. The thinking is that if a politician is so desperate to win his party primaries through intimidation by force or coercion of money, such a politician is most unlikely to put a sportsman spirit in the conduct of general election. This is the more reason that elections in Nigeria are seen as political battles that must be fought with adverse consequences for the nation. If you stretch the argument further, a politician that wins election through foul means is in the same league with a solider that plans coup against constituted government. Such politicians are indeed enemies of democracy.

Since the birth of this Republic, no governing party at the state level has allowed other political parties to win elections at the local government level. Thus all the elected council chairmen and councillors belong to the same party. All the parties are guilty of that. The reason is that the state government controls the state electoral commission and members of the body are given marching orders to make sure that only members of the ruling party win election. These are indeed enemies of democracy. That is why the sceptics of state controlled police are afraid that the way the state electoral commissions are controlled, that shall also be the workings of state police.

A national assembly that will wait till the middle of the year to pass the annual budget, the most important legislative instrument to empower the people; the members are enemies of democracy. In the same vein, a indolent legislator that receives millions of Naira monthly for doing nothing is an enemy of democracy for depriving other Nigerians the dividends of democracy. And to insult the intelligence of the other hard working Nigerians, legislators in their so called empowerment programme buy cars, motorcycles, sewing machine, hair dryers etc to appreciate the electorate. This is another streak of enemy piercing the very soul of democracy.

A president that travels abroad and lambasts the youths of his nation as lazy is eminently qualified to be categorized as enemy of democracy. Similarly, a president that lives in denial of the marauding and murderous presence of the Fulani herdsmen and instead blames the late Libyan leader as responsible for the attack and killings in his country is indeed and in truth an enemy of democracy. Same with a state governor or council chairman who deludes himself that the only people best suited for political appointments are those from his village or his ethnic coloration is a fine copy of enemy of democracy. While still thanking the senate for the new political vocabulary , it would not be a bad idea if our leaders at all levels go on soul searching and divorce themselves of the badge of enemies of democracy. May be that is too tall a dream to achieve.