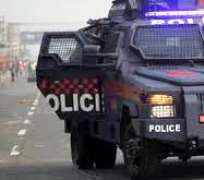 Heavily armed policemen have sealed the complex of Kano state House of Assembly in the early hours of Monday.

Reports say that the armed policemen were deployed to the House about 2 am to prevent members from gaining access into the Assembly Complex.

The deployment of the armed policemen may be connected to the current move to remove Speaker of the House, Yusuf Abdullahi Ata and principal officers by some lawmakers.

Reports also have it that the Speaker had ordered for suspension of all activities in the House until after Eid-El Kabir festivity.

SP, Majia stated that deployment of the police personnel is to maintain peace in the complex.

He said, “We deployed our men to the Assembly to ensure that nobody disrupts the peace.

“We need peace in the state and therefore we will not allow anybody to tamper with existing peace and harmony being enjoyed by the people in the state.”

Now, Mr. Attah is accused of incompetence and failure to carry everyone along.

Presently, 21 members have signed to remove the Speaker and all principal officers.