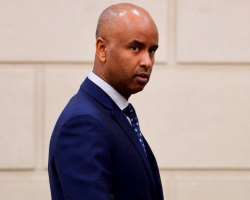 MONTREAL — Federal Immigration Minister Ahmed Hussen will head to Nigeria in the coming weeks amid an influx of nationals from that country seeking asylum in Canada in recent months.

Three senior federal ministers delivered a blunt reminder to them Monday that entering Canada illegally is not a free pass into the country.

“Coming across the border in a way that tries to circumvent the law or defy proper procedure is no free ticket to Canada,” Public Safety Minister Ralph Goodale told reporters.

After Haitians in 2017, it appears Nigerians armed with valid U.S. visitor visas are the latest group to come across at Roxham Road in Hemmingford, not far from the Lacolle border crossing at the Quebec-New York border.

Hussen said he plans to travel to Nigeria soon but noted the federal government has sent three immigration officers to Lagos.

Canada has been working closely with the United States over the abuse of U.S. visas by Nigerians whose ultimate goal is to get to Canada within weeks of arriving.

“It’s becoming apparent to us that they’ve obtained these visas to come to Canada to make asylum claims,” Hussen said.

Goodale said all of the country’s international obligations are being met in dealing with asylum.

“They must prove they need Canada’s protection to keep them safe,” he said. “Seeking asylum is not a shortcut to get around normal immigration rules and procedures.”

In mid-April, Quebec officials said the number of people coming across the border this year had tripled from the same time last year.

The Quebec government said projections suggested there could be as many as 400 crossings per day this summer, compared to 250 in 2017.

Goodale said since that spike around Easter, the numbers have been a manageable 70-80 people per day.

New temporary facilities are being constructed at the border for up to 520 people to deal with those needing to stay for more than a day.

“There’s no evidence this will stem the tide of people exploiting the loophole in the Safe Third Country agreement,” she said in Ottawa. “The Liberals once again refused to close the loophole.”

The Safe Third Country agreement took effect in December 2004 and states Canada and the United States recognize each other as safe places for refugee claimants to seek protection.

But the agreement only applies for claims made at an official border crossing, so if asylum seekers enter at an irregular crossing, they are entitled to a hearing.

As with any agreement that is 14 years old, Hussen said, it would be wise and prudent to refresh the Safe Third Country agreement.

“(But) I want to make it clear there are no formal negotiations with respect to the Safe Third Country agreement,” Hussen added, noting it is discussed alongside other issues such as visas and border security.

The federal immigration minister also said progress is being made in implementing a triage system at the border that will allow asylum seekers to head to Ontario while relieving pressure on major cities like Montreal and Toronto.

Hussen said Ontario officials were in Quebec to get help in setting up a reception centre for newcomers.

“The pieces are coming together it’s just a matter of time, but I don’t expect this to take months, it’ll take a matter of few weeks,” Hussen said.