…set to be buried on Friday, 11 May 2018 according to Islamic rites
By O'tega Ogra 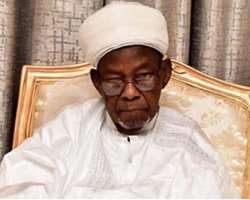 Renowned Kano businessman, philanthropist, leader of Islam’s Tijjaniyya movement in Nigeria and patriarch of the famed Isyaku Rabiu Family, Khalifa Sheikh Isyaku Rabiu has passed on yesterday in a London Hospital. He was aged 93 years before his death and would be buried according to Islamic rites on Friday, May 11, 2018. This was confirmed in a statement released by the family.

Born in 1925 to the family of prominent Islamic scholar, Muhammadu Rabiu Dan Tinki, a Quranic preacher from the Bichi area of Kano State who led his own Quranic school. Khalifa Sheikh Rabiu grew up memorizing the quran and learning Arabic from where he moved to Maiduguri in 1942 to further his Islamic studies. In 1946, he returned to Kano to establish himself as an Islamic scholar and by 1949 he had become an independent teacher of Arabic and the Quran.

In the early 1950s, Khalifa Sheikh Rabiu ventured into commercial enterprise and established Isyaku Rabiu & Sons in 1952. Originally the firm acted as an agent of UAC and was trading in sewing machines, religious books and bicycles. In 1958, the firm had a breakthrough when Kaduna Textile Limited was established and it became one of the early distributors leading to the establishment of his own procurement agency for textiles produced by the Kaduna Textiles Agency.

Khalifa Isyaku Rabiu emerged as the leading distributor of the company in Northern Nigeria and by 1963, he joined a consortium of businessmen from Kano who came together to form the Kano Merchants Trading Company.

He was later to set up the Kano Suit and Packing Cases company producing suit cases and handbags and by 1972, he established the Bagauda Textile Mills whilst also being involved in the selling of sewing machines.

From then on he established a series of ventures in different segments of the economy including frozen food service, real estate, sugar and a motor vehicle and parts distribution company specialized in Daihatsu products. However, unfavorable exchange rates and economic conditions forced the company to scale back on manufacturing and returning to its trading roots.

Through all these Khalifa Sheikh Isyaku Rabiu never forgot his Islamic roots and continued with the propagation of Islam whilst still being a scholar. In the early 1990s, He was later made Khalifa (Leader) of the Tijjaniyya sect in Nigeria by leaders of the Tijjaniyya Islamic movement in Tunisia.

In 2017, Khalifa Isyaku Rabiu was awarded a Doctor of Letters degree by the Bayero University, Kano in Nigeria and until his death he lived in his Goron Dutse residence in Kano.