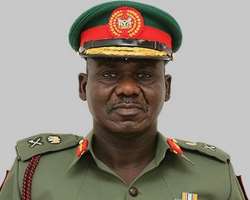 Nigerian Army is set to begin a fresh operation in northern Borno and some parts of Yobe state. Gen. Buratai stated this during the inauguration of Gelengu community water project in Balanga local government area, Gombe state yesterday.

He said that the Operation Last Call was aimed at enabling the IDPs to relocate to their host communities to start a new life and settled down.

Buratai said apart from protecting lives, the Army also provides people with what will sustain their lives

The Chief of Army Staff, added that people of the northern Borno and Yobe state will soon go back to their respective communities and commence farming activities for this year.

He said that the Army would soon commence operation in the areas to enable the Internally Displace Persons (IDPs) to relocate to the areas.

“We are planning for the major exercise, called Operation Last Call in northern Borno and parts of Yobe state.

“We know the importance of agriculture in the life of ordinary citizens. We want to ensure that by the time we move into northern Borno very soon people will return to their homes, resettle and commence agricultural activity for this year’s rainy season,” he said.