Osinbajo is sucked in propaganda, deception, impunity and sleazes: PDP 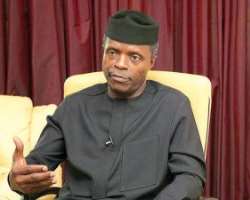 The Peoples Democratic Party (PDP) has asked Vice-President Yemi Osinbajo not to belittle his high office by allowing himself to be used as poster boy to bandy figures and make unsubstantiated statements against the opposition.

PDP in a statement issued yesterday by its National Publicity Secretary, Kola Ologbondiyan, said Nigerians, particularly the younger generation, were thoroughly disappointed in Osinbajo for allowing himself to be used to divert attention “from the impunity and corruption that saturate the All Progressive Congress APC-led federal government.”

While reacting to the comments made by the vice president at the APC ward congress in Lagos, PDP said as a professor of law, and an occupant of the exalted seat of the vice president of the country, Osinbajo should know better than allowing himself to be used to bandy figures and make unguarded statements at public events.

“We note that the vice president has refused to heed wise counsel and accord respect to his office by desisting from such unguarded comments only because he has been sucked in and entangled in the propaganda, deception, impunity and sleazes that not only brought their administration to power, but have become its trademarks in the last three years,” it said.

PDP said Nigerians should note that all assertions by the vice president, especially on the performance of the President Muhammadu Buhari administration as well as his allegations and bandying of figures against the opposition, have remained unsubstantiated.

The party further said Osinbajo, in his 'sanctimony,' has been silent on the exposed corruption under the Buhari administration, including the leaked memo detailing N9 trillion corrupt oil contracts at the NNPC, exposed sleazes in oil subsidy deals, diversion of Internally Displaces Persons (IDP) intervention funds.

According to the PDP, other alleged sleazes under APC watch include the probe of a misappropriated N18billion in National Emergency Management Agency (NEMA) under his direct supervision as well as other looting in government agencies such as the National Health Insurance Scheme (NHIS).

“The vice president is also ominously silent about the prevailing high-handedness and human rights violations and the aloofness of the government resulting in daily bloodletting in various parts of our country,” it added.

Also, the PDP said if President Buhari is allowed by Nigerians to come back after a horrible first term, he will further divide and impo verish the people.

The opposition party said President Buhari's first term score card showed anti-people policies and failure to serve the good of the ordinary citizens, contrary to what he would want Nigerians to believe when he spoke at the All Progressives Congress (APC) ward congress in Daura, Katsina State last Saturday.

It said it was unfortunate that the same President, who, in an interview with Voice of America (VOA) last week, could not present any agenda to justify his re-election bid, is attempting to sway Nigerians with cosmetic patriotism.

“What President Buhari's handlers fail to understand is that Nigerians, being direct victims of his misrule, are aware that the harsh and reckless policies of his incompetent administration, coupled with his body language, are expressly responsible for the untold economic hardship, ethnic division and daily bloodletting currently ravaging our nation,” it said.

According to the PDP, if indeed the president was out to serve, as he claimed at the APC congress, he should show any of his 2015 campaign promises that he has fulfilled or any development project initiated and implemented to the benefit of the people in the last three years.

“President Buhari's second term agenda is directly a quest to continue to enrich the presidency cabal, promote nepotism a nd protect cronies and corrupt members of the APC from the long arms of the law.

“President Buhari's second term is also a quest to continue to ignore and destroy democratic principles; to continue trampling on the rights of citizens and persecution of opposition and perceived political opponents; to continue the derailing of democracy with manifest disdain for constitutional order; to continu e with the intimidation and harassment of the legislature and the judiciary; perpetuation of mediocrity in governance; de-marketing Nigeria at international fora and to blame everyone else but himself for manifest incapacity to govern.

Meanwhile, the Chairman of the party, Uche Secondus, has frowned at the action of the Economic and Financial Crimes Commission (EFCC) which he said has continued to link him to have collected money from the forme r National Security Adviser (NSA), Col. Sambo Dasuki (rtd), when the matter is already before the court.

Secondus in a letter sent to the acting Chairman of the EFCC, Mr. Ibrahim Magu, complained bitterly of the continued linking of his name with collecting money from Dasuki when nothing of such ever happened.

Secondus had through a letter Ref. No: EESE&C/02/03/05/1 and dated May 3, 2018 titled: 'Re: Mention of Prince Uche Secondus on the list of Looters of Nigeria Economy,' written by his lawyer, Emeka Etiaba (SAN) and which was copied to the Minister of Justice and Attorney General of the Federation as well some foreign missions in Nigeria insisted that he never collected or sent anybody to collect on his behalf money at any time from the former NSA.

In a statement by his media Adviser, Ike Abonyi, the PDP boss expressed fear that the continued listing of his name might be a deliberate ploy by the commission to implicate him, scandalise his name in a desperate attempt by the ruling APC to suppress him, dent the credibility of our great party which is being rebranded by him.

The letter reminded the EFCC that the issue concerning Secondus is already in court and wondered why the commission should not approach the court with its evidence if any than continuously indulging in the media trial.

It drew the attention of EFCC to the suit before the Chief Judge of Rivers state in Port Harcourt where an interlocutory order was granted against the defendants and same restrained them from further publishing the name of Secondus.

The letter also drew the attention of the commission to the injunction order published in the dailies as ordered by the court a copy of which was attached to the letter to the commission.

“The said publication by the minister has become a subject matter of Suit No: PHC/1013/2018 in Secondus Vs. Alhaji Lai Mohammed, Federal Government of Nigeria and Vintage Press Limited (publishers of The Nation Newspapers). The above Suit is pending at Court 1, High Court of Rivers State, Holden in Port Harcourt, Rivers State and same has been adjourned to the May 28, 2018 for hearing.

“Having regard to the fact that the subject matter has become subjudice and having drawn the attention of the commission to the facts contained in this letter, it is our hope that the subsisting order of court should be obeyed and if the commission has evidence of collection of money from the office of the NSA by our client, (as an agency of the federal government which is the second defendant in suit No: PHC/1013/2018), the commission should avail such information to the federal government for its defence of the suit.

Finally, the letter said, “Our Client hopes that the ongoing scandalisation of his name is not a ploy by the commission to give effect to the desperate attempt by the federal government to intimidate him and destroy his credibility and that of the PDP as well as other opposition leaders as the general elections approach in the pretext of war against corruption.” This Day Live