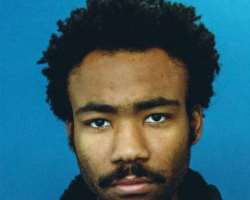 Last night, Donald Glover performed his new single “This Is America” midway through a  successful appearance on Saturday Night Live  (where, graduating from fledgling to fully-formed polymath,  he did double-duty as host and musical guest ). A four-minute-long video debuted online in tandem.

Through the “This Is America” video Glover, as Childish Gambino, takes on the complicated relationship between race, guns, and American capitalism. The video opens with a choir (singing, “Yeah, yeah, yeah, go, go away”) backing Glover's first verse: “We just want to party, party just for you,” he sings. “We just want the money, money just for you.”

A beat comes in; the music's lightness evokes the feeling of summertime as a dancing, shirtless Glover makes his way across an empty lot. Suddenly, there's a man with a hood over his head slowly coming into frame. We see a gun, Glover's hand on the trigger, and hear a bang! The man slumps over, dead. Everything darkens.

“This is America,” he raps in a chant as his voice drops. “Don't catch you slipping up.”

Dancing Black children in school uniforms take center stage as riots and police chases slip in and out of focus in the background, mirroring the news cycle's increasingly short attention span. A door opens and we cut to an uplifting scene of a Black choir mid-reverie; Glover enters, singing along, then turns and shoots them, using an automatic weapon. The scene, seemingly a reference to the  Charleston church shooting of 2015 , is horrifying and shocking. But Glover continues to dance as the beat kicks back in, the loss of Black lives only a blip in the consumer-driven machine that is American capitalism.

Minor musical cameos from Young Thug, 21 Savage, Offset, Quavo, and Chance the Rapper are dotted throughout the song, along with an appearance in the video from SZA. A verse even includes a shoutout to Kodak Black — a rapper who's been successful  even after being indicted on counts of sexual assault , in large part because fans continue to extoll his genius. A wave of Black talent is acknowledged in pop culture, but Black lives at large are neglected.

Near the end of the song, his lyrics suggest how the exploited and oppressed are convinced to play within the confines of this system. “Get your money, Black man,” the choir chants. The video ends with Glover running alone in the darkness, chased by faceless figures. America wants more and more from him, and America will take it all.

Watching this video sparked, for most, an immediate sense of shock and outrage, with many praising Glover for his message. Yet amid the adrenaline rush, it is  also important to question the purpose  of staging and centering these gruesome moments of anti-Black violence. Are we revisiting the trauma of mass shootings and Black deaths just for the sake of waking us up to our terrifying reality?

As we navigate the  fallout of mass shootings  and  gun control debates , those challenging the use of explicit violence in art do have valid points. But here Glover seems to say, yes, you should be uncomfortable. White people and non-Black people of color aren't, and never can be, fully aware of their privilege, and this is Glover saying we all have to wake up to that reality.

“This Is America” reminds us, in painful detail, just how dominant of a force Black music and culture is in America, but it's in stark contrast to the way Black people are exploited, oppressed, and killed in the same country. This message can't be ignored, nor can the people who are delivering it — it's why so many people are calling Glover a once-in-a-generation talent, and why work like “This is America” is so electrifying.