Dino: The unseen hands behind his ordeal 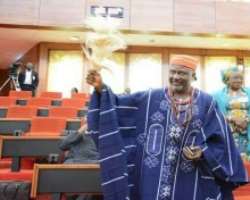 Senator Dino Melaye has in recent times been under attack from the Police high command, with the police weaving one drama or the other around him. For one, the running battle between him and the unelected governor of his home state, Kogi, governor Yahaya Bello, has been common knowledge due to the rumored gubernatorial ambition of the embattled Senator representing Kogi West Senatorial zone. And the governor relies on fawning over the presidency to return to power in 2019, while Dino, a widely acclaimed rabble-rouser, is depending on his legendary radicalism to pull him through.

Both gladiators are members of the All Progressives congress, APC.

In the Senate, the mass appeal he enjoys is because of his penchant to swing with popular mood prevalent at the time. With Senators Shehu Sanni and Ben Bruce, they form the populist triumvirate, and are therefore the arrow points when it is the issue of doing hatchet job for the Senate.

The squabble between him and Bello reached a point where Bello allegedly sponsored his recall process. But that recall died at incubation since it was not a well thought-out plan. Furthermore, it was clear that the issue of recall is a near impossibility with the present Nigerian situation-unless it be to put it on record that a legislator has been recalled. This is because, even if the Independent National Electoral Commission, INEC, succeed in the recall process, the final buck stops at the doorsteps of the Senate for the final determination.

Hence Bello, with the alleged tacit node of the presidency, failed in the first recall attempt.

Not giving up, he then accused Melaye of being a gun runner, and sponsor of terrorism.For this reason he was declared wanted by the Police, who at the same time still provided him with security details while he continues his work at the red chambers.Then the story of the appropriation of money for the purchase of Tucano jets from the US broke. President Buhari has already withdrawn the sum of $496 million from the Excess Crude Account, ECA.

In a letter to the National Assembly to inform them of the withdrawal, Buhari wrote:

“In the expectation that the National Assembly would have no objection to the purchase of this highly specialized aircraft, which is critical to national security, I granted anticipatory approval for the release of US$496,374,470.00. This was paid directly to the treasury of the United States Government. I am therefore writing, seeking approval of this House for the sum of US$496,374,470.00 (equivalent to N151,394,421,335.00) to be included in the 2018 Appropriation Bill, which the National Assembly is currently finalizing. The balance of the requirements for critical operational equipment is still being collated from the different security services and will be presented in the form of a Supplementary Appropriation Bill, in due course”

The Legislators finally saw the stick with which to beat the presidency after the disgraceful invasion of the red Chambers by Suspended Senator Omo Agege, who strolled into the red Chambers with some people and took away the mace, the symbol of authority of the Senate.They had decided to move a motion for impeachment of Buhari,and Senator Melaye was to move that impeachment. Buhari got wind of the deal and ran back from the United Kingdom where he went for the Commonwealth Heads Of Governments meeting. The instruction was allegedly to make sure that Melaye is put away for good. And the word went out:: Pursue all available cases simultaneously.

Hence INEC should open the recall case at the same time that a criminal case is brought against him. An All Points Bulletin should be sent out on him. Which was why he was prevented from flying out of the country to Morrocco for an official function.

A failed recall (for a second time) and an Alleged N1 billion down the drain by Bello, a livid Bello has sworn that heads must roll for those who could not judiciously use the alleged funds for the recall process.

With the failure of the recall, the only thing the police is holding is the gun running case. Melaye was charged to an Abuja Magistrate Court where he was denied bail and to be kept in police custody for 38 days effectively to keep him out of circulation. And the alleged theatrics on both the side of the Police and Dino gives it a garb of a Nollywood blockbuster, and at the same time, increasing the popularity of Dino due to sympathy to his perceived persecution.

The Senate, however, has gone ahead with the preliminaries of the impeachment plan besides summoning the Inspector General of Police, Ibrahim Idris. For the second time, Idris snubbed the Senate summons While the Senators are livid, Senate President Bukola Saraki suddenly began to play a stalling game.

Nigerians are waiting to see how the drama will unfold.