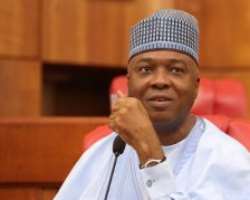 Nigerian Senators joined their House of Representatives counterparts to condemn the pay out of a whopping $496 million by the President Muhammadu Buhari administration  for the purchase of  Tucano jets from the USA without the approval of the National Assembly.

The House had earlier on Wednesday lashed out at the president for the wanton disregard of legislative powers, which its members minced no words in saying that it was an impeachable offence.

Lawmaker representing Edo South, Senator Matthew Urhoghide, at the  plenary on Thursday, moved that the Senate should  invoke Section 143 of 1999 Constitution, due to the Presidency's act.

“It's a violation of Section 80 subsection 1, 2, 3, 4. The procedure of the expenditure is wrong. There ought to be an appropriation before such an expenditure. I hereby request that the Senate President should invoke Section 18 of the Constitution,” Urhoghide said.

The senate had earlier during  the plenary on Thursday, read a letter from the president requesting the inclusion of USD 496,374,470 (equivalent of N151,394,494,335.00) in the year 2018 Appropriation Bill for the purchase of Super Tucano Aircraft from the US Government, read by Senate Leader, Ahmed Lawan.

Reacting on the development, lawmaker representing Enugu North, Senator Chukwuka Utazi, said “This Tucano helicopters are to be brought in 2020, why include it now in appropriation. This is an impeachable offense.”

He said Mr Buhari should be punished for the 'impeachable offence' he committed.

Senator Shehu Sani, representing Kaduna Central, in his comment, said that President Buhari's action was a breach of constitution. He said: “We are not ignorant of the security challenges that is going on in the country and how it affects the stability of our country. I appreciate the efforts of the Federal Government to bring an end to the killings in Nigeria but this is no reason to breach the Constitution.”

The matter was however forwarded to the Committee on Judiciary and Legal Matters.

He justified the president's decision to make the withdrawal on precedence.

“He took action based on national interest, that's why he authorised this payment. As far as I'm concerened, this is the first time that money drawn from excess crude oil account is being brought to the National Assembly. Since they begin to operate this account, I have never seen any expenditure that was brought here for approval.

“N2 billion was used by the previous PDP administration to fight Boko Haram in 2014. Governor Godswill Akpabio was the one who moved the motion at the National Economic Council to get the money. N5 billion was taken for power generation, funding was also sourced for Niger Delta, the same process was not taken by (ex-President Yar' adua). It was later taken to the National Assembly and it was approved.

“This is a PDP conspiracy. I will like PDP to tell us which of their governors has taken the money released from excess crude oil account to the state assembly for approval. If this is a PDP conspiracy to tarnish the image of Muhammadu Buhari, they will not be able to do it because we are coming out with figures.”

Raising a point of order, Mr Akpabio denied moving a motion for release of funds when he was a governor.